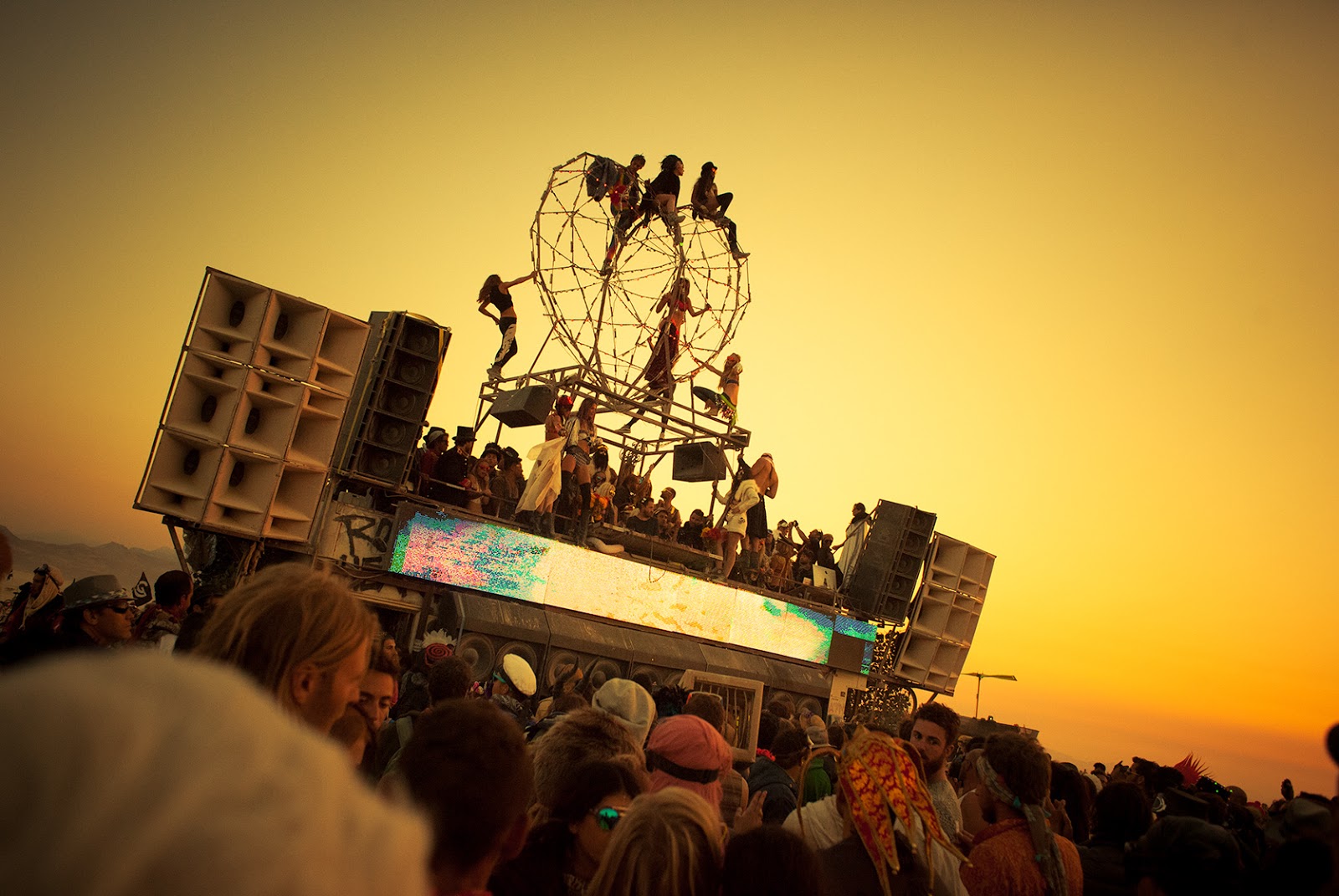 The picture above appears tinted the way the world becomes if you drink too much NyQuil. Or, that's the effect it has on me, anyway. It is a picture of my friend playing the Robot Heart sunrise set at Burning Man this last year. One sunrise that I missed. I left only minutes before my friends arrived, confusing the time that my friend was starting, arriving too early and then leaving likewise.

He was in town yesterday, so we decided to have a movie adventure.

Why is it so difficult to see good films?

We attempted to go to a showing of Birdman. It was only playing in one theater in the entire SF Bay area. The theater was immune to all the iPhone maps we used to try and find it on foot. We ended up stopping cars in a mall parking lot and repeatedly asking directions, little updates along the way. The theater was hidden behind a rundown row of apartments that bordered the mall parking lot. It was being eaten by the nearly impoverished.

What am I talking about? In SF, those apartments probably housed millionaires.

It makes no sense that a film starring Michael Keaton, Edward Norton, Emma Stone, and Zach Galifianakis should be relegated to one old crumbling ruin of a theater hidden on the dark sloping backside of a mall parking lot. Though perhaps those are my age and cultural preferences acting slighted rather than the facts of their diminishing star qualities. Also, this added to the dramatic theme of the film. Maybe it was intentional. Or, I waited too long to see it and it was only playing in one theater.

Nope, I just looked. It's playing in three theaters and one that was much closer to where we were. Fandango is useless and dangerous.


The film was great. It was intended to unfold as a single take though it also self-consciously revealed that this could not possibly be so, with actors appearing instantaneously in new positions and wardrobe as the camera panned. Some of the cuts were detectable if you paid careful attention, while most others were seamless.

Still, it makes little sense to me. It had a limited released on Oct. 17th, that's it. I would guess that with the star power that it has and the director being the maker of 21 Grams... ah well, what do I know of such things. The closest of the theaters to me, in Sonoma, only occasionally plays a film that I care for, Moonrise Kingdom and St. Vincent (with Bill Murray) being the two that come to mind, separated by two years.

You get the idea. I'll let this point of fact go. Give me time.


Birdman appealed in odd ways. The director, Iñarritu (forgive the missing accent over the a), does an excellent job at both anticipating and toying with expectations. The dialogue is quick and powerful, the pacing is purposeful and dynamic, and the theme of escape-through-flight is eternal. Though there are elements to deride within each of the characters, the director does not instruct us much as to which we should prefer, which is a refreshing lack of directorial condescension.

Usually, for me, there is something so nervous about Michael Keaton's performances that it can make me almost uncomfortable, but in this he does a good job at making me nearly uncomfortable in different ways. His character is a sagging collapse that somehow retains some of the charm and mystery of his former self, as well as some of the power, though also a hefty dose of petulance.

The director never lets on whether his supernatural powers are real or entirely imaginary. His dressing room gets trashed and other characters acknowledge it, but none witness the trashing. Often used through desperation, his powers over the physical world augment the unfolding of the character in both touching and satyrical ways. During a helicopter battle a griffin screeches down from a rooftop during his tremendous hangover on the opening day of the play, etc.

Haven't we all felt that way.

There were montages at the beginning and end that I would have liked to have seen incorporated more into the story line. My friend and I readily agreed on this point. They were visually powerful and suggestive but somehow the director seems to have missed the connection, or not made it as fully as he could have. Instead, he suggests the flight of suicide as the visual denouement though never really tells us one way or the other. The implication is clear but never achieves anything more than just that, implication. One might suppose that would be enough, though it somehow felt lacking, even given the intentional blurring of the lines between the real and the imaginary.

Perhaps it is only meant to impute the inner desire to fly, to escape, to die. In that, perhaps Iñarritu succeeded. Though we both wanted closure, not hints.

Still, we gave enthusiastic thumbs up to the film. It is truly unfortunate that it does not have more of a wide release in theaters because many of the effects are exclusively cinematic.

My buddy and I are old battling critics, separated by opinion and at occasional eternal war with one another, though on this we were united. The front lines have been blurred and now we share old war stories as if we had always been fighting for the same side. It is a by-product of age, I suppose. We have grown up a bit together and recognize that there are better enemies out there than each other.


Well, let me wrap this up with one of my coincidental interests. I've been reading again lately, so beware.... references and quotes are now upon you.

Mephistopheles.   No joy could sate him, no delight but cloyed,
For changing shapes he lusted to the last;
The final moment, worthless, stale, and void,
The luckless creature, he would hold it fast.
Here he who fought me off so well-
Time triumphs - stranded lies, a whitened shell.
The clock is muted-
Chorus.                          Mute! Like midnight it is stilled.
The hand is falling.
Mephistopheles.            Fell - it is fulfilled.
Chorus.    It is all over.
Mephistopheles.            Over! Stupid name.
Why over?
All over and pure nothing - just the same!
What has this constant doing ever brought
But what is done to rake away the naught?
So it is over! How to read this clause?
All over is as good as never was,
And yet it whirls about as if it were.
The Eternal-Empty is what I prefer.