The high cost of commerce 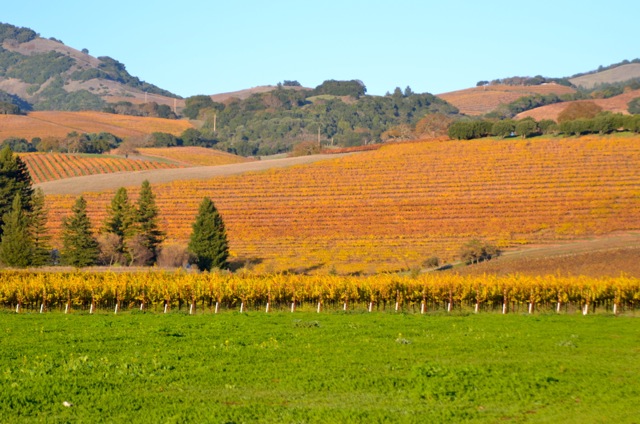 (Autumn in the wine valley)

Ok, I had said that I wouldn't say any more about it, but I checked my UPS delivery status for my new iPhone.... They've pushed my delivery date back a full day now, until Friday by the end of day. This is unacceptable.

How is it possible that the Waze app would have given me a better delivery prediction than UPS?

Speaking of, I enjoyed my first week of working a single day in the city yesterday. Like a fool, however, I was checking Waze and trying to determine the best time to leave the city, spending the least amount of time in the car, trying to find that golden window of opportunity...

But, I missed it. The times kept growing and growing until I realized that it was best to go meet a friend and wait unto the traffic had died down for the evening, which led to a light dinner to prepare me for my full dinner later when I got home.

I'll have to find a better way of doing this single day in the city thing. I am the shape of different habits.

Ah well, I'll be bending my new iPhone in no time. There were millions of reports of angry users who had put their iPad away in their tight front pocket and then found that it had been bending upon completion of rigorous calisthenics.

I don't even really know why I ordered online. We have Apple stores in California, where some people still tolerate me. I could have just walked in and bought one, like any fool.

Walking to dinner last night, I explained to my friend that the new phone cost me almost $600. He was in disbelief. I went through all of the costs, starting at the base price of $200 with a contract renewal, then another $200 to upgrade to the largest memory option, then the $99 cost of Applecare Plus, then CA tax which is apparently calculated on the full imaginary cost of the phone, then the upgrade fee.

What is bullshit is that AT&T charges a $40 "one-time" contract renewal fee. There was nowhere online for me to explain that I had already paid this one-time fee the last time I renewed, and also the time before that.

They should really work on their understanding of the meanings of words: one-time, unlimited, special offer, etc. These are terms that any phone company just throws out there into the marketplace and hopes that nobody notices.

Also, my friend had me verify the veracity of my shooting story the other day.

It's all true, folks. I swear it. I was there, almost gone.

Florida is where bullets go to retire.