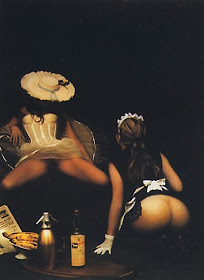 Jesus Fuckstink, I'm glad we're all done with the Ray Rice story. To barely even speak to an idea of equality or inequality is a very dangerous one. It turns out that they are very different things, for everybody, even in theory.

People guard their prejudices far too carefully, even violently.

I'll try to remember that.

The phrase, "How dare you..." echoes in my recent memory.

I have my own thoughts and feelings about the subject, but there's no point in exploring those, they are even far more dangerous than the more obvious ones that I was positing for the entertainment of an ever diminishing few.

I decimated my readership. I'll see if I can win them back over the next few weeks.


Several people told me that they enjoyed most my post about desert kissings.

Everybody seemed to simply love to read about my impending divorce. It gives them an open opportunity to be empathetic, and I must admit it... I do so like to be loved.

So, somewhere between kissing and divorce lies online infamy.

What a word, divorce. It sounds so unpleasantly mature, and shameful, and dated.

Divorce was invented in the 70's and 80's, something that parents did.

When people blithely tell you to "hold on to your inner child" they must mean that you should not get divorced, or else never get married.

I feel as if I am about to lapse into Pat Benatar lyrics.

I'm "bruised fruit" now, probably a brown banana. There's little avoiding it. No young female suitors will want me, none to come calling and courting in the sitting room, just off the entrance vestibule, on a summer Sunday.

I might hope to sweet-talk them, to keep their company and interest, offering them licorice from the country store or a fresh cold seltzer, then I might slowly direct their hand toward one or two balls.

The much celebrated and seasonal family balls and dances are designed to preserve a young woman's reputation, you see. It is all an established folly to which twitching trousers must sometime conform.

Together, in the moonlight, we can enjoy The March of the Dual Ovals Dance, and of course, Beware the Sinister Loure of the Malignant Idlers, with its haunting overtones and spritely explosion of last minute melodies.  A fountain of masquerading pleasures.


Fuck, fuck... too much Victorian lore in todays spewings.

I do wonder what it's liked to get fingered.

I mean, I think I can guess what it would be like, but it's mostly just a guess, based on having stuck convenient things like my own fingers into my butt before.

But the corollary curiosity is an assumption to which I have only corollary access.

If these things were the same then somebody certainly would have said so by now. We must assume that these things are rather more different than similar, in the way that flying is not swimming, nor swimming vice versa.


I once had a girlfriend that was obsessed with sticking her digits where they barely fit. She also had a collection of skin-tight gloves, but I only made that obvious connection afterwards, and far too late.

She was all thumbs and forefingers, mostly.

Curiosity is a funny and odd thing, encouraged by many but then denounced by all.

What am I doing?

Well, I'm trying to win readers back and perhaps this is not the appropriate tack, approach, or method.


As misguided as it might be, this post was the result of chatting and considering the clever affection of shared butt enthusiasm, and the many butt enthusiastas.


Why should I finger it all up with so much silly talk.