The Fall of Man, Bananas 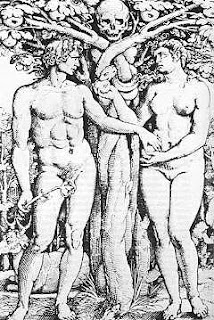 Jesus has taken the pain from my heart. He touched me.

I should have never mentioned it here, the pain. Well, I should have never mentioned it so cryptically. People do not want someone who has recently become a father to be ill, in any way. It is important that Dad is healthy, and if possible, happy. It's almost as important as Mom's health. For the most part I am happy, and healthy, and sometimes I'm almost Mom.

Perhaps I don't say this often enough to all of you: I love you.

Now, back to Jesus... He defeated death. Have you heard? He went into Hades and conquered sin, the devil, and death, all for us, even though we didn't ask him to. We needed him to but we didn't know that yet. We were born sinners and he had to do something about that. Anybody that's ever held a newborn in their hands can feel the evil emanating there from Adam's original sin. They are hot to the touch, babies. Their heads are soft. It's science.

When I finally die there will be a group of my friends who might very well think, "Well, he's going to have to face God now. He won't think he's so funny any more when he stands naked before The Lord..."

Why naked? Does he not understand the effects of tasting from the fruit of the tree of knowledge of good and evil?

Speaking of soft heads, one of Christ's soldiers tried to explain away evolution the other day, stating (quite incorrectly) that Darwin had a deathbed conversion and disavowed his own theories, as if that somehow means anything at all, even if it were true.

This astute fellow also insisted that bananas are incontrovertible "proof" of intelligent design. I mean, holy crap... are they running out of ideas, or what?

Oh shit. This isn't what I want to write about. I hope that no pain ever becomes so great that I start talking like that, or worse, thinking like that. I've been practicing my deathbed conversion. I want to get it right when the Lord comes to take me, to lift me into the clouds when I finally toss off this mortal coil.

That's a fair bit of tossing off.

I return to the gym today, after several days absent. Rachel and I have been trying to divide the mornings up so that she can workout also, but I have been lazy. I can not write while trying to watch the boy and do not feel like rushing once she gets home, and can hardly write with she and the boy in the house (It feels awkward to write "she and the boy" it seems as if it should be "her and the boy" but that would be wrong, right?).