I believe I have a gift certificate.... let me look 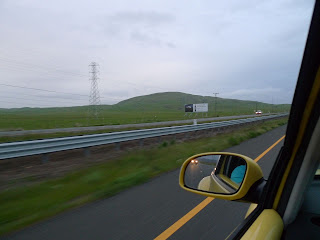 Speeding tickets are fun, getting them. I got one the day of the company picnic. They mailed me information about it. It was a "Courtesy Notice" which arrived yesterday. The fine of $366 is due tomorrow, or a bench warrant for my arrest will be promptly issued. If I decide to fight it in court I must pay the fine by tomorrow anyway. Then, they will one day decide if they want to give me the money back, or fine me more for having tried in court to assert my blamelessness. So much for the presumption of innocence.

Pay now, pay later. We prefer a little of both.

It took 5 days for the letter to travel 27 miles from the Marin County Superior Court to our home. Google Maps shows that it takes 38 minutes by car. I got the ticket on August 2nd, the notice was printed August 14th, it was stamped August 15th, it was mailed August 16th, it arrived 5 days later on the 21st.

That which is not being destroyed by corruption will be handled in time by incompetence. All that it takes to lose faith in the system is to brush up against it.

I'm sure nobody would be able to explain why it took 3 days to actually end up in the outgoing mail from the time that it was printed. This type of government functionality is a process. The arm of justice swings wide and slowly.

I'm tempted to not pay it just to see how long it takes for them to respond. But that way brings much unpleasantness in the form of bureaucratic withcraftery.

Also, I wouldn't want to deprive the state of California from some much needed revenue. I've been told that you can overpay by $2 and it's fun to watch the process by which they must legally return the excess money to you, but those options are closed to me now. I must call in tomorrow with a credit card rather than send in a potentially bad check. I'm going to ask if I can split it up between three or four different cards.

"I have this gift certificate that I haven't used..."

"Any chance I could work some of this off, maybe test driving cop cars for you?"

Ah well, best to quickly put it behind me. I will have to try to make up some lost time in the car getting there and back.

That's the thing: I like to drive fast. I always have. When I am a passenger I hear people ask rhetorically, "What's the hurry?" Or, "Oh, you'll get there soon enough..."

But I always think to myself, "I'd so much rather be in that other car, driving."

If I came into sudden wealth I would purchase a new car first. Many must dream of having a new car. It is where you can spend the most money with the least amount of thought. It is a guaranteed loss, we're told, just to drive a new car off the lot. That's what I want, to pull out of the dealership and mash the pedal to the floor, a detonation of sudden commerce. A volcano of fiscal waste.

Then, once a new car was in place underneath me, I would better be able to find ways to waste the rest of the money, perhaps by buying another car. If one enjoys driving fast, as I do, there should be additional options as to how to break the law. What form will it take...

The day that I got pulled over the cop asked me why I still had a New York Driver's License. I explained that we also had an apartment in NYC. He asked how much time I've spent in California this year. I said, "Just less than half."

"You'll need to get a California driver's license if you live here."

"Am I allowed to have two?"

He did not like me very much. That exchange was the closest the event came to being anything of interest. He clocked me at 83 in a 65 zone, 3 mph past the point where the ticket becomes more serious, and expensive. His name was Fitzgerald, which I repeated to myself as Sgt. Shitzfitsimmons on the way to the picnic. It felt like torture to keep my speed under 80 the rest of the way there, and then on the way home. These speeding laws are stifling the natural rambunctiousness of the American working man, they are hobbling the horsepower that carries the precious cargo of the American dream. How is industry expected to ever bounce back at these overly-regulated speeds.

Why couldn't there have been at least one founding father that was obsessed with racing his carriage through the streets of Philadelphia, crazed with that magic sense of forward, the feeling that only ever-increasing tempo and momentum can bring.

Perhaps some distant kinsfolk of the Andretti family.