"spooky action at a distance" 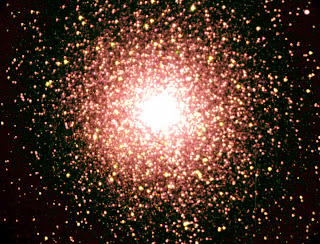 (globular cluster at the edge of the Milky Way)

I think I must have done something terrible to myself. If not terrible, at least wrong. It just doesn't feel right any more, my body.

I was reading the NY Times yesterday. There was an article there in the ScienceTimes section about black holes. A relatively simple observation led to a few questions, among experts. These questions had to do with what precisely happens to matter when it falls into a black hole. A question that some felt was already well understood, mathematically. There are three theories which come into play (there are more, of course, but these three present problems): Einstein's equivalence principle (a cornerstone of the General Theory of Relativity), quantum field theory, and entanglement.

One of them can't be correct, as they are, yet all three seem quite correct and have tested extensively to seem so. The area and action that occurs just beyond the event horizon either represents smooth space in which nothing substantial occurs or there is an invisible firewall in which energy is also given off as matter is pulled in, and some sent back out.

This is where the previously connected atomic particles become entangled, with some particles on one side of the horizon, some on the other. We "know" that this must occur. This is the "spooky action at a distance" that Einstein (and others) predicted, and then Einstein mocked as improbable. He was wrong. The "spooky" phrase was his. It is an action/event that we are now familiar with, one that is tested regularly and describes a relational quantum state between particles that interact and then become separated.

I've made it sound less important than it is, the actual question. It has to do with the exchange of energy in the transaction. The nature of that event might disprove that there even exists such things as space and time. They may only be convenient ways for us to understand the nature of matter, but as concepts they might also be as false as Newtonian physics. Though that is the more far-reaching suggestion of the suddenly opposing questions, but not entirely implausible.

Space and time might only be well known ghosts, ones on their way out.

Or rather, any outcome seems very improbable, but one of the competing theories will fail. What we thought we knew about the universe must be wrong, in a fundamental way.

Nobody had noticed this problem until very recently. The resolution of which will cause one of those well established disciplines to crumble and should help answer the question of whether information is "lost" or retained, not only in a black hole but possibly for the entire universe. If it can happen at the event horizon, then it can happen.

There are many that have been wanting to disprove Einstein for years. To do so, in any way, would ensure that your name survived in the world of cosmology and particle physics.

These are high times for quantum mechanics with the recent discovery, and tentative confirmation, of the Higgs Boson. For the standard model to be brought into question this way potentially endangers our knowledge concerning matter at sub-microscopic scales.


It will change nothing about our lives or our deaths, but it will give us insight into whether our universe is what we think it is, and what shape it might take in places where we can not see or know.

What it does change is how we approach the perennial question: does information (matter) last?

The hackneyed joke "matter matters" might be just that, a joke. Matter might do something else altogether: disappear.