... an individual lust for strangeness 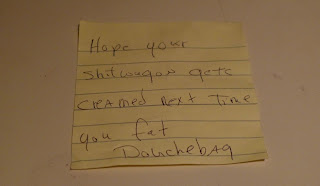 (A message from the non-virtual realm)

That's all I needed, a day off.

I meant to write about my day, the one on Friday. I drove into SF, there was a company picnic in Golden Gate Park. I got a speeding ticket on the way in. It will cost hundreds of thousands of dollars. That is the most that can be said about it. I did nothing to make the event memorable, nor did the cop.

It ruined my day.

When I got to the picnic I stepped in dog shit. I walked around for about two hours and then finally decided to go home early, to beat the Friday traffic that would be trying to get out of the city early. About halfway home I opted to stop at the Apple store that I used to work at and take a piss, not actually "in the store" but near it.

For whatever reason traffic was backed up trying to get into the mall. I had planned on going straight past the usual turn lane. The straight lanes were empty while the turning lanes were backed up by hundreds of cars. Just as I was pulling up to the light it changed. I had enough easy momentum going so that I just casually and safely pulled ahead of all of the stopped cars and made the left turn into the parking lot. I found a spot, got out of my car, went into the mall, took a piss, then stopped by Apple to "say hi."

When I left there was the note on my car. Well, I didn't notice it at first but I saw it as I was up on the interstate. I turned the wipers on and grabbed it as it came towards me. I laughed and smiled to myself for about 10 minutes. What luck.

"Hope your shitwagon gets creamed next time you fat Douchebag."

At the company picnic I realized something: working from home alienates me from the others. Well, that and other things, like my personality. I'm not part of any clique there. They all stood in circles chatting with one another, circles that were loosely defined by the various departments, sometimes not so loosely. It would have been awkward to try to work into any of them so I just drifted from place to place, smelling faintly of dog shit, drinking beer with a speeding ticket in my pocket.

I know not to drink too much at company events. That is how I would end up breaking into a circle, to announce something nonsensical. Sometimes I like to pick an odd phrase and challenge myself to use it casually in conversation, to work it in somehow. I'm best at this game when I've had more than four beers. I'm a ninja at twelve. Phrases like "pseudoeuphemism," then follow it up three sentences later with "pseudoephedrine." It's a challenge.

It seems to me that all of the people that excel in this world are those that I used to smirk towards at afterparties and think to myself, "They're trying way too hard." All of those people seem to rule the world now. It is the triumph of geek chic. They talk endlessly about video games, using exclusive social references, mapping out non-existent nerd landscapes, out "sourcing" one another.

But they seem relatively happy. That's what always gets me. They've found some thing that brings them happiness, some thing that I am embarrassingly ignorant of (to them). They might as well be discussing the calligraphy of Mandarin characters. I just stand there smiling at them like I was born with a Texas death sentence IQ. The conversation switches to the formation of Cantonese characters, imperceptible to me.

These are the cool kids in the new world. There is nothing weird about them, except the obvious. They never admit to any individual lust for strangeness. It is all shared, an agreed-upon and codified set of accepted and supposed eccentricities.

They did not spend decades battering their consciousness with mind melting drugs and they don't get it when I say things like, "There are a small handful of reasons that I don't smoke crack..."

Don't let my observations fool you: these people are bright. Some of them are very smart and they have no problem proving it for you just as you begin to think that you can speak their language. It can be aggressive, though never hostile. They carefully guard their newfound status. To live your life as a geek and then to suddenly be rewarded for it, in a field that is rapidly expanding... that is really something.

All others are outsiders now, and they (sort of) wish to keep it that way. Few are capable of cruelty, except among those that have been tormented.

I am at an age where I could pretend to have been into video games all along, but what would the point of that be. I know better than to act that way, I hope. Just as I would easily sniff out anybody that tried to feign authenticity within the world of electronic music. They would most certainly detect a phony bumbling into cyber-space.

They would laser-blast me into oblivion if I ever tried to fake it, doubling up on their vitality points in the process, racking up nonexistent gold pieces. Or, whatever it is that they win when annihilating others in the imagination.

Set your optical amplifiers on stun... there are some trolls to torture.

I do wonder how much money some of them make. I'm trying to upgrade my lasers, for enhanced real-time strategy performance.