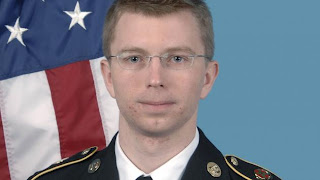 I do not know if they provide hormone therapy in a military prison. Somehow I find it hard to believe that military benefits include such a thing, particularly when you have been dishonorably discharged this way, well before retirement. I suppose that we'll have to wait and see on that one. 35 years is a long time, but we're assured that she could be out in 7.

The extreme sentence is meant to deter other whistleblowers. It was his defense, the gender identity issue. But his motivation is claimed to have been heroic, to make known certain egregious wrongdoings. It's somehow easier for me to believe that Manning's motivations were well intentioned where Snowden's still seem off to me, somehow. I find it strange, the claim that he was acting heroically and as a true patriot but it was somehow the gender dysphoria that caused it. Are those things related?

Feminists should be outraged, the claim that he acted this way because he's actually a woman.

But what do I know. Everything that I see has been filtered through the press, presented as being other than it actually is. What doesn't seem off when viewed through that strange prism?

Males are three time more likely to suffer gender identity disorder than women, I read this morning. About 1 in 500 experience this gender discontentment. That is easy to believe. I've known a few. One of the children that I grew up with, our student body class President, Nate, is now Natalie. I believe I've told that story here before. Ah well, I looked, I couldn't find it. Perhaps I've never told the story.

In any event, we had long known that Nate was probably gay. Even in the barely formed understanding of such things in childhood we sensed that something seemed different about him. Children can be quite cruel about differences. We were. When I saw her many years later it was at a gay nightclub called The Parliament House, a legendary (for some, infamous for others) nightclub/hotel/restaurant complex on South Orange Blossom Trail - not the nicest part of Orlando, notorious for bad drug dealings, illicit behavior, crime and desperation.

I did not recognize her. She had to remind me who she was.

Ah well, I don't have time to tell that story in full today. The boy has woken up and the world is slowly spinning into the light.