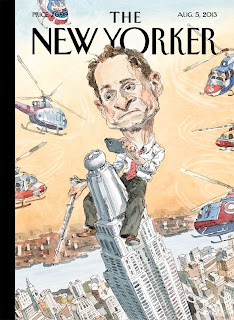 Just when you thought no more "C. Danger, it's A. Weiner!" jokes could possibly be made....

This is just one reason that I love The New Yorker, and New York.

That is a fucking funny cover. Look at it carefully. It is a work of genius.

As I said, I could care less about Anthony Weiner's online or personal behavior. I don't even find it all that shocking. But the immense, arrogant defensiveness of his own actions is something worth considering, and John Cuneo has.

Here's the simple version: I'd like to be in politics, I'll present myself as a sound candidate for Congress, a stable decision maker... Ooops, I get involved in a sex scandal, step down from politics, create elaborate articles discussing my family's role in my recovery, attempt to get back into politics... it then comes to light that I was lying all along, even while doing my exposé articles, it's none of your business, this is a personal matter between my wife and myself, I'd still like to be the mayor of New York, I'm not leaving the race. Vote Weiner!

This is somebody that appears to be a glutton for both power and punishment, possibly at the same time, and has a tremendous incapacity for decision making as a recorded process. That's why he has my unequivocal support for the mayoral candidacy, and the office. I only wish that I were still able to vote in the city. New York needs this. I am almost amazed that France hasn't offered him a position in their government yet.

Those are people that can recognize that this guy has what it takes. The right stuff.

You want, perhaps even need, people like this in politics. Fuck, I'd like to see him beat Clinton in 2016. Why not? His problem would be getting people to volunteer to assist in his campaign. He's made it difficult to stand up for him, publicly. If it were a purely anonymous process, this guy would be a shoe-in.

The cover, evoking the victim-ness of King Kong trapped in a brutal city, an uncontrollable and misunderstood savage, ill-adapted to the confining restrictions of urban life, forced by hostile combatants to climb, to flee to a place of hoped for safety... wielding the antenna of the structure (brilliantly resembling a hypodermic needle), all while sexting the broken head of the hubristic symbol, grim-faced and determined ... oh my....

I mean, fuck... this brings the bullshit claim of sex-addict into clear focus. The era of self-proclaimed victimhood has gotten so out of control that we actually seem to have taken a collective step back and considered it... Well, you know, it's not really his fault, what he did. He has a disease. He's a sex-addict. I once dated one.

What...? We really have reached a point where nobody ever need take responsibility for their behavior again. Sex addiction is what made me do it, too.

Interestingly, I am a sex addict. All of my decisions in life have been centered around, and informed by, this initial problem. I mean, there might have been a touch of various abuses here and there in my past, perhaps problems acclimating to certain social settings, but all of these issues just speak to the larger problem: sex addiction. Do not let this affliction fool you, it may have only seemed as if I was enjoying it. That is part of its insidious nature. The only choice I had in the matter was finally reaching out for help. I was powerless against it. God alone took my hand and removed it from the offending organ from which I was playing my cursed melody.

Do not be angry with me, I was suffering from a damned disorder. Some have even seen it up close, sadly, and they will attest... when it rears its ugly, demonic head.... you can recognize it for the scourge that it is, oh dear dreaded malady.

But: in no way should this prevent me from winning the lottery, or being awarded the presidency, or running a major company (maybe just being the treasurer). In fact, it should be part of my qualifications, my pedigree, if you will. To show that I can overcome even the most terrible hand that life has dealt me (over and over) I should be rewarded with public office, power, and wealth. I can be trusted to keep everybody's best interest in mind, because I know what it's like to truly suffer. I am a survivor.

Fucking brilliant. What a story. It is the triumph of talk-show democracy.

Why doesn't Lance Armstrong claim sex addiction? He only feels powerful and sexy when winning the Tour De France. What choice did he have, really?

From now on, I'm going to be suspicious of anybody that even admits to wanting to have sex. Those are the first signs, the symptoms. This should shift the Creationism / Intelligent Design non-debate. Did God make us all sex addicts, or was it Darwin that did it?

But... if those jinxed with the frailty admit they have a problem, publicly, then they get a free McDonald's Happy Meal, and maybe a chance at the cover, or the center-fold...