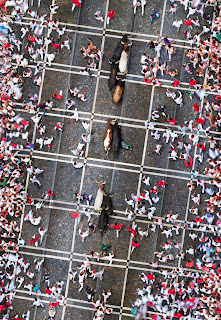 I just want the world to last in a semblance of its present form. Well, perhaps that is the curse that we seem to be stuck with, the semblance of form.

That's one way that I know I'm getting old: the future seems forbidding.

I was in the past for a little while, it wasn't all that great, particularly the 80's.

But the future is terrifying, right? It must be... we are told daily, from all directions. Everybody instructs us in the details of precisely how runaway civilization has become, though few agree on "the facts." Why should they? The clock is ticking in all directions. The world is an enormous terrorist act just waiting to happen. We are held hostage by this group this week, that group next; some foreign, some domestic. Radon creeps up through the floors. We all seem trapped in an unending b-movie version of what the future was supposed to be.

Don't have children, it will scare you witless. You find yourself fretting over things to which you were once blissfully indifferent. You will read the news with a more critical eye, one trained on the impending future. You will nod your head from left to right while staring at the ground. You find yourself saying comical things in your mind, a parody of a parody repeating itself.

Don't let parents fool you... they are all scared shitless and wearing diapers also. They only seem happy because they do not often read the news that you read. Why would they?

You will want your children to be happy and healthy, naturally, even more than you may want it for yourself. You will want to magically create those very things out of life: health and happiness. But you will wake up one day and realize that it is all beyond you, you have no control over anything and you never did.

All that you can do is make it possible to possibly happen.

It is terrifying to realize that the only underlying truth there is in this world is that it will one day end.

I try not to be an alarmist, but it is difficult. All of the experts are alarmed, so why not me?

I have a friend that insists that global warming is merely a liberal hoax. He has access to other information, which he prefers. He scoffs at sources that disagree, no matter their number, nor origin. The immensity of agreement only confirms the conspiracy for him. His information states these types of climate changes are quite normal and there might not be much to worry about anyway, except maybe a democrat winning again in 2016, and Obamacare not getting repealed.

It is possible that the experts get paid to alarm us, to draw attention to their exclusive set of growing facts. It is how they get funded. Perhaps there is just a lot of competition within the scientific communities and they have become like commercials: somehow louder than the show.

I like thinking that. Just ignore them all, they are trying to sell me something that I do not want.

That way lies spirituality, to deny science and reason and fall back exclusively on belief, hope. Happiness is the ability to choose to be in fear.

Those fears of the future create a nearly perfect introduction to the spiritual realm. In court it is called leading the witness. Though in this case it is more of an example of leading the defendant.

I am reminded by many that the supernatural begins where reason leaves off. I doubt that they grasp just how right they are. That mankind possesses an imaginative component is unarguable.

We are told two divergent stories: one, that all religions say basically the same thing, which they do not - and two, that there are spiritual reasons that nobody agrees past a certain point, you must tune your heart to your own truth. Seeking truth is the presumed basis of much of this thinking.

But when I seek truth... people often get angry with me, because I do not readily find their animal-spirit frolicking in the nearby meadows of my mind. Their truth seems silly to me, and not just in the improbable sense of the word. The shape of my imagination does not resemble theirs, at all, and does not rely on theirs for existence. That simple fact alone tells me much that I need to know about religion. Personal convictions and beliefs seem both necessary and dangerous.

Some people's religion seems to be just accepting the acceptance of other people's religion. But even they have their limits, sensibly. Nobody takes my gods seriously, when we discuss such things.

It always requires so much solemnity, yet they will insist that their gods also have a sense of humor.  As for those gods, the ability to choose among many is a relatively recent addition to the process. Some are still finding their way among the countless options. It is easy to get distracted with so much wisdom floating about.

Perhaps I just got dealt a set of very cynical gods, they neither seek my approval nor praise. The only torment they offer is - quite thankfully - to non-believers, infidels.

I take books off the shelf and read single pages every now and then. It is better than watching the news and it keeps me on my feet. The existentialists make some sense. It is all absurd, we share in it though always by ourselves, there is little that can be done to change any of it, we must somehow give our lives meaning, even though the effort and results may be meaningless themselves, we will all die. It is absurd.

That sounds about right.

Somehow, you are expected to prevent this knowledge from depriving you of happiness... rather, this knowledge is meant to be a reason for it; the catalyst to freedom, its own predicament.

Once understood, something is both gained and lost.