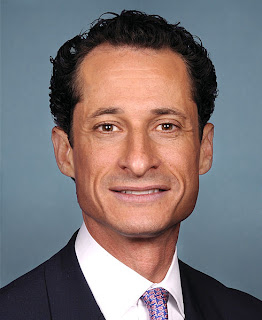 We live in hilarious times. That a candidate in the NYC mayoral race has a (seemingly) uncontrollable need to send semi-naked pictures of himself to young women that he doesn't know has NOTHING at all to do with his ability to lead this city out of its troubles and back to democratic prosperity. With he and Spitzer steering this great city to recovery, well, what could possibly go wrong, friends.

The age of social media will eventually force us to a realization that will be dispiriting for some: everybody is fucked, and others don't care. I want ol' Tony D. Weiner to win. I mean, when the history of these times are finally written would you want to be found in the anti-Weiner camp?

He was just trying to really connect with young voters.

He and his wife have assured everybody that it's all over now, and even though the previous scandal is not quite when it actually stopped - when he was forced to step down from Congress - he has since gotten help. I can't emphasize this enough: This has nothing at all to do with his ability to lead....

I mean, come on... this is another Clinton dynasty in the making. These people have what it takes. Why would we deprive ourselves of such a thing?

I mean it. Politics is a total travesty. I think it's hilarious. Do not let my tone deceive you. I want these people in public office, almost need them there. A sex scandal should be a rite of passage. We pay our taxes, give us what we wish for.

Some might not remember that before the previous sex scandal broke (the one before this one) Weiner was known as a complete control freak that often abused his staffers. He's 6 foot 5", so he would physically intimidate and mistreat those who were most dedicated to helping him. He would insist that they were all always available to him. The Times pretty regularly wrote articles about him, questioning his misplaced intensities. He had a higher turnover rate than McDonald's.

Man, I miss New York.... If you can claim it there, then it'll sell in Delaware.