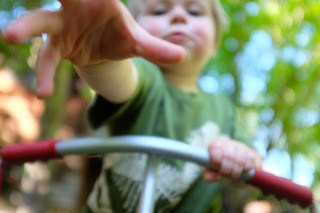 The remnants of cosmic dust have finally left my bloodstream. A good night's sleep last night and I am back in form, what form there may be anyway. It is not the staying up all night and partying that wears you out, it is the lack of sleep, mostly. But lying in your bed and not sleeping is a very different thing from lying on a friend's wooden floor all night tussling with space spooks, eyes closed, music blasting. I have known both, well.

But it is nice to be back home again. A free day today and perhaps a mountain hike with a friend tomorrow. Some reading on the couch, a nap, etc. Rachel and Rhys are in Chicago, visiting, celebrating her grandfather's 88th birthday. It was on the 4th. A nice festive day for a birthday.

I did not have to suffer many patriotic fools on the holiday. Nightclubbers are not generally known for their nationalism, neither their patriotism. There is, I believe, a tendency to align with some nebulous concept of universal love and mutual respect rather than the principles upon which countries are formed.

All you need is love, as the saying once went. Though it turns out that such love, as an all sufficient social bond, has proven to be lacking in results when compared against its claimed abilities. As a recipe for happiness most find that love alone is merely the component that is most pleasant to include, not always the most useful. But, such qualities should be judged by their implicit aim as much as their result. Intention has the potential to be as vital as outcome.

Faith is another needed component, an almost invisible quality. But faith without love often results in fundamentalism, it is terror at nearly any level. So, there is that to consider. Somehow, one must not give in to the impulse to rely exclusively on any quality that is heralded as the complete answer to anything. Nothing is that simple. Often the call to "faith" is used only to prevent meditation and abort conversation. It is used as a standard by which others' dedication may be measured and scrutinized. Be wary of it.

That is my wisdom. Be wary of those who would answer the complexity of life with a single all important response in the form of a quality - a call, plea, or demand to rely exclusively on simplicity as an answer to all things, to give it over to god.... It is almost political, its empty though purposeful rhetoric. It is the curse of abstraction, used as an attempt to avoid the painful burden of analysis; similar impulses that operate on different levels.

Somewhere, floating between the two, there is an occasional glimpse of truth, a momentary flash in the darkness, rarely as still and knowable as the faithful claim. It is only you that is speaking there in that space, tackling memories.

Nothing is written, except perhaps briefly in the stars, or across the sands.