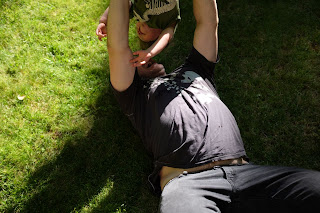 (Note the hideous accretion of blubber along the waistline)

Yesterday, two friends, James and Cato, came out from the city and we hiked a bottle of red wine up to the summit of Bald Mountain where we promptly drank the silly thing. The day was beautiful and the views were fantastic. The conversation was pleasant even though Cato insisted on bringing to battle qualities that can not be divided, such are his powers of imagination. I tried to be reasonable but was forced to focus my energies elsewhere: each upward step.

The hike was difficult for me, as many things have lately become. But I made it, with having only to stop and rest a few times, whining most of the way like somebody's fat older sister. Honestly, I feel like an aging pack mule. I carry an extra 30 pounds with me everywhere I go. Each step a thunderous reminder. It is my fat biting back at me.

I exercise regularly but rarely exceed the 45 minute mark for cardio. The hike was approx. four hours from parking lot to summit and back. My chest was thumping and my lungs were a savannah grass fire, an uncontrolled burn.

I let James borrow my Martin guitar when they left. It does me no good being here. It taunts me and my gimp left hand. The continuing damage of the nerves on that side are enough that the hand has started to curl up and turn red. It looks like the feet and stockings of the Wicked Witch of the East, and I the victim of a small house falling.

Nobody, I don't think, questions the severity and seriousness of a stroke, but this nerve damage has given me a little glimpse of insight into what that might be like. Steps must be taken to avoid such a thing. But when I go to get a physical the doctor keeps telling me that I need more pork and wine, and fish on Friday's. He's a good catholic, so what can one do?

To respond to a conversation from yesterday:

Cato asserts that there is a god, present in all things, though perhaps not omnipotent, nor omniscient. Omnipresent, is the term.

This is the laziest version of faith of which I know.

So, let me attempt the response that I could not quite muster yesterday.
It is a form of deism, the default position that order in the universe implies a certain mindfulness of a creator. It does not. The hypothesis is not needed, to paraphrase LaPlace's famous response to Napoleon. It is the optional position of those who are reluctant to make the step of reason: that there is no proof of God. It confuses the presence of order with the implication of god. It is a way of saying that physical rules are actually a mystery, and that within that mystery there still exists a possibility of a god, and then confusing the existence of a possibility for a favorable probability. That is known as "the leap of faith."

This leap is unnecessary. Gravity, or any other force, no more suggests that there is a god than anything else, which is not at all. The speed of light in a vacuum being a constant likewise does not confirm deities. A sunrise is beautiful but the face of god is there only for those who wish it to be. Because beauty exists it does not imply a god, nor do physical laws and the interaction of matter. This is the DMT argument: I smoked a drug and saw something strange and unifying there in my hallucination. Other people have also seen this. That must have been proof of god, right? What other explanation could there be?

The structure of the living experience has similarities. The explanation is that simple.

Well... I just took the dog for a walk. As we were returning home two crows were startled off of the power line and they made their famous croaking sounds as they took flight. This surely was the voice of god, right? What other possible explanation is there? All roads lead to god if that's where you want them to lead. Nothing will persuade someone who wishes to maintain a belief in something. Reason is useless against faith because they believe it to be so. There is a phrase for this phenomenon: willful ignorance. This un-winnable contest does not mean that imagination is the victor of the interaction, it only shows that reason is powerless against it, because mankind largely has a stronger need to believe their visions.

A contrary use of the imagination would be to simply imagine a universe without a god. It is very easily done. See how simple that is?

All that it takes to defeat imagination is to counter-imagine.

Now, just try to do the same with rationale. It can be done, but not nearly as easily. When you remove the burden of proof gods will pop up everywhere, often demanding money or sacrifice. If there is no god then how did they make the Wizard of Oz? There is no imaginative limit to the hypotheses possible. This brings some people immense joy, even a sense of freedom, the ability to choose among so many possibilities without being burdened by evidence, or a lack thereof.

To paraphrase an old friend: Freedom is the feeling one gets when they are not aware of what truly controls them.

Rationale, imagination, and ignorance are all somewhat optional. Choose wisely. 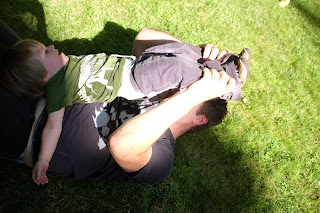 (Attempting to use my son to hide the fat)