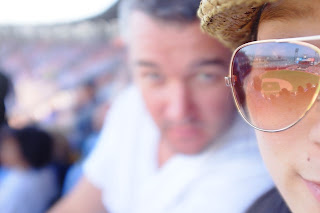 I use prepositions often, poorly, and when not needed. A close, dear friend had the great love for me to point this out. So, now I have that to contend with as well. It is a very bad habit, I'm told.

Through writing this site I had almost exhausted my self-consciousness. My mind had become like an empty white room. The place where actors will often chat with god. Now, I have tapped a whole new reservoir of shame. My anxieties have birthed a new center. It's like drowning in a hidden virgin spring, but only in a dream. How apropos that it involves a set of relational words, ones often denoting time and space.

We went to a baseball game last weekend and almost all of the pictures that I took are over-exposed. I was focused more on beer, I guess. I had forgotten and somehow left the ISO on "Auto." Because I was spot metering it tended to blow everything in the background out. I struggled with it all day but never figured out what the problem was.

So, there's that also. I am able to disappoint even when not writing or speaking.

Normally I wouldn't care, or, wouldn't care quite as much. But ever since I wrote about choosing to be a woman I think I've been suffering some pre-menstrual curse. Now, I have the pain of childbirth to consider and anticipate. If the Old Testament teaches us anything it is that the origins of the cosmos and mankind were a series of similar mistakes and subsequent hardships.