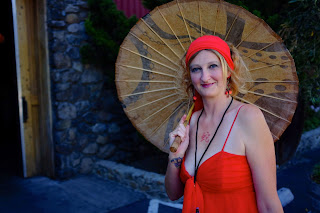 I had meant to write about a Dixieland / Bluegrass festival that we went to last week, here in Sonoma. But I have let the time slip past. Now, the memories are beginning to lose their focus. We do not remember events, we remember our memory of them. It was really something. I was the most ethnic person there. Well, there was one attractive, sharply featured Asian girl - though we agreed that she must have been working.

The thing that seemed unusual, and even rare, to me was how happy all these people seemed. These were not the nay-sayers of life. They were just dancing, or sitting and tapping, and enjoying the music. There were even older couples approximating the Charleston. It was really something. It was like a rave for retirees.

There were bands that did nothing but Sophie Tucker covers, Clarence Williams covers, and there were other bands that covered many other artists... The Black Diamond Blue Five, The Devil Mountain Jazz Band, the Golden Gate Rhythm Machine. We heard tunes from Jelly Roll Morton, Sidney Bechet, Earl Hines... "Maple Leaf Rag", "Black Bottom Stomp" , "Dreaming the Hours Away"... all of it, all day.

We were just lying in the grass, watching the sky. Great black birds with fantastic wingspans swept above us.

One of my favorite cassette tapes, one that I have not been able to replace, was by The Black Eagle Jazz Band back in the mid-80's. I used to drive around in my pickup truck and blast it all day long, doing the "Jelly Roll Blues." My friends thought I was kidding, or crazy, or worse. Very little music that I've known since has been as unburdened by time.

At the festival, there was a particular bawdy performance of "Was I?" by Chick Endor and Charlie Ferrell (sung fantastically by the raver pictured below).

Here is an approximation that I'll leave you with this morning.

Then I got home, next day with a swollen head
My girlfriend asked if i'd had fun I said,
"was I drunk?
was he handsome?
Did momma give me hell?
Did I get a thrill?
Am I full of quiver?
Was he rough?
Did I care?
Am I glad I fell?
Every time I think of him do I shiver?
Was he hot?
And was I?
And would he stand for maybe?
He would not?
Did I lie?
Does he still think I'm a baby?
If I was, am I still?
Do I care?
Don't be silly
Was I drunk?
Was he handsome?
And did momma give me hell?

Was I drunk?
Was he handsome?
Did momma give me hell?
With his hands loose as no refusin'
Did he fight?
Was I blue?
Almost shamed to tell
And I don't know yet the system he was usin'

Well I said, stop, please, behave!
Well what's the use of breathin'?
He said, give
So I gave
After all, what was I savin'?
Am I glad?
Holy gee,
Have I had fun, you're askin' me?
Was I drunk?
Was he handsome?
And did momma give me hell?" 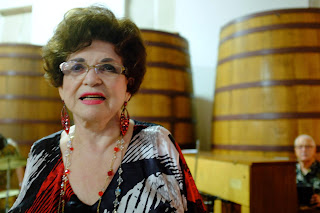