Our Lady of the Flowers 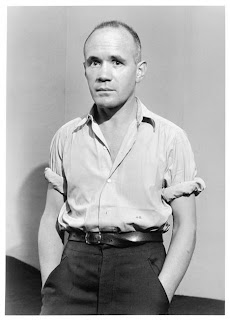 I finished reading Genet's first book last night, had planned on saying much about it this morning, but my mind is blank. I slept too much. This is often the case when I take a Xanax. It is why I take Xanax. They do not recommend it as a sleep aid, at all. One has a more difficult time reaching the important stages, "deep" and R.E.M. But if sleep-anxiety is the reason that you can't... well, it does help to reduce that, famously so.

Like many great books it does not adhere strictly to conventions. Or rather, it defies enough of them to remain intelligible, while showing that the author knows how to obey a custom and when to break from it.

He employs a strange and powerful use of metaphor. They seem to obey a strict inner need. It is as if the gravitational pull of any comparison must immediately submit to the force of the one who created it. There are these strange and wonderful transformations that float past. Angels haunt the work. Traditional values are upended, and that is to say nothing of the explicit prostitution and homosexuality; shocking subject matter for the time. 1942.

I almost couldn't read the book. Sartre's introduction had scared me away. It was dense and nearly incomprehensible, like so much of his writing. I went back and read the introduction again when I was 2/3rds of the way through and then it made perfect sense, every word of it. That is what I mean, I guess. The book is so singular that it is difficult to describe or address. This flimsy assessment here is presumptuous and terrifically incomplete, at best. The book can be felt and understood, even while it remains foreign, yet never impersonal.

One nearly forgets that they are reading a "narrative" until the last 50 pages or so. Something very peculiar and magical happens - all the time spent in vague and meandering expository, flights of imagination... suddenly, the story stands up and goes to trial. As if several marionettes have unexpectedly had their strings lifted, and the drama begins to unfold even as it is unravelling, disappearing, even decomposing. He puts the characters in place somehow behind your back.

It was one of the least expected and effective changes that I've ever encountered in any telling of events, imaginary or otherwise. I couldn't believe my eyes, or mind, the thing that was happening on the pages in front of me. I couldn't wait to read the book again, even before I was finished with it.

I read pages aloud to Rachel, following her around the house.

I see that his influence was massive, particularly among the writers that I read when I was younger: Artaud, Brecht, Bukowski, the beatniks. More recently, Salter.

I wish now that I would have read Genet instead of wasting so much of my time with Henry Miller. If "Tropic of Cancer" was truly "the cause" for what we now take for granted, free speech in literature, then Genet's book could perhaps be credited for something far more important: free thought. There is an existential liberty within the work that seems nearly perfect, complete, heroic even. Beautiful, that it is offered so freely.

A small coincidence: that it was written the same year as Camus' "The Stranger" though written entirely from within a prison cell, one that Camus only describes and places his character in.

A guard found the manuscript in Genet's cell and set it on fire in front of him, reducing it to cinders. He had written it on stolen scraps of brown paper bag. It is difficult to even imagine what this caused within Genet.

I had hoped to say more but have run out of time. I spent the morning playing a newly borrowed accordion, for the boy. He was enthralled by it. Every time I tried to put it down he would speak the word and make the hand motion for "more."

If I ignored him then he would command in clear and insistent terms, "I said, play it again, Monkey-Boy..."

So, a little dance I would do, pirouetting from gypsy key to gypsy key, collecting coins as we went. 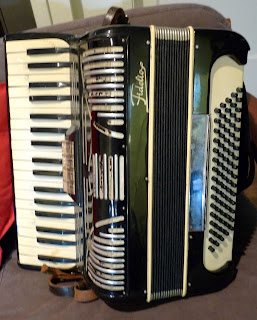