SF Giants vs. The AZ Diamondbacks 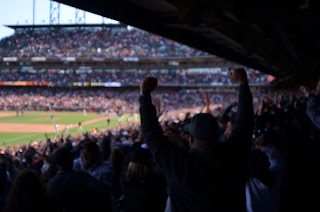 (a game seen through beer eyes)

Today we take a bus trip into the city, to see a ball game. It is biblical, or perhaps Roman, in nature: a coliseum battle between powerful mythical giants and fearsome serpentes virperidae. Who thinks of these things? It is brilliant, and few even bother to notice.

The Gigantes vs. Crotalus Atrox

Some friends are in town from LA.

Yesterday, we drank so much beer at the Lagunitas Brewery Tap Room and then Ernie's Tin Bar afterwards that in the middle of the night I was canceling the bus trip in my mind, for me anyway, telling myself that it is just not possible. Now, in the morning, I have reconsidered. It would perhaps be inappropriate to pull out now. Much money has been spent on the project already. We will drink even more beer, besting all previous records. It has been paid for in advance, along with the tickets to the game, and the bus ride. There are certain expectations.

It is written in beer suds.

The drinking will start soon. It is the way of things. I do not wish to insult these people's customs with my reluctance and reticence. I honestly don't know how I'm going to survive another day of it. I feel as if I had my ligaments stretched by succubi all night. My entire body is experiencing a mild form of atonia.

A beer should loosen me up further, put a little spring noodle back into my faltering step.