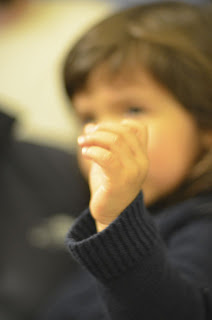 The rain continues. The colors changed late this year, some still struggling to break through. The summer lasted longer than the year before, by weeks. The winter did not bring on its force, still hasn't. It's unfortunate. The valley is pleasant when lit from within.
A friend departs for India soon. A spiritual quest. An internal and external retreat. The searching. I want to go. I want to search again for something new. I have been eyeing my newly unpacked books, remembering the vague feeling of youthfulness, of wondering without perpetual doubt. It will pass, of course. It always does. I'll toss out the dusty gods and spirits, re-read "Letters to a Young Poet."
Rilke is about as spiritual as I ever get any more. All else is nonsense, and much of Rilke is as well.
I gave away many of my Lorca books, so that they couldn't haunt me. A friend was learning Spanish. That was my contribution. I miss the Gypsy Ballads. Romancero gitano.
Poetry is a silly thing. Here is a short one I had written and forgot. I found it in my pocket. In a way, it is about the woman at the bar. I saw her again yesterday. She must have forgotten about Vegas for the time being. Before I had even finished the verse it had become about something else, the mumbling of the religious.
Her hands were raised roof-wise,
fingers did the wild calculating
eyes darting in fiscal prayer
lips, espousing the imaginary profits.
Do you see what a silly thing it is? Less, even than a sketch.
I used to bring a small notebook with me and would attempt to describe people that I would see in public, like a sketch-artist. I would try to capture their "essence" quickly, without them noticing. Very little action, no expository, just description.
I found one of the notebooks a few years ago (several had been lost) and flipped through. The characters were unfamiliar to me. The erratic words informed by beer, or more. Written as if I was stumbling, with a borrowed pen; imaginary prophet indeed. The descriptions were forced, many of them, trying to be something more than mere lines. Too complex to capture. Like the shape of a child's hand, holding nothing.
.
Posted by Sean Q6 at 6:32 AM