"Just do what you think you should do..." 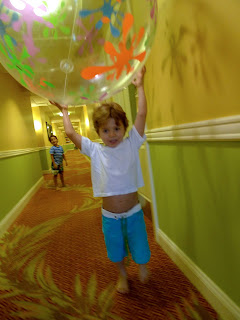 I've been thinking about childhood lately. Not my own, just childhood in general. I don't remember much of my own. I must force myself to remember things. It's never possible to separate what I've told myself from what really was. We write and re-write the stories all along. Memory is mostly fiction, buffered by a few agreed-upon facts, re-told to suit one's current needs.

We have been surrounded by kids. Almost outnumbered.

We went to Florida to visit with friends and there were kids everywhere. Three of our friends back in NYC are pregnant. Six if you count their counterparts. Two of our friends here are fostering a child with the intention to adopt. They are everywhere, kids of all ages. In Orlando we visited with my brother's children, the cousins. A first. We took pictures at the fair. The first meeting of the brothers, uncles, aunt, and cousins.

There were children everywhere at the fair. I question whether the production could even be put on without them. Kids are what drives a fair economy...

Has nobody told the candidates?

They were the exception throughout my whole life, children. Very few of my friends had them. Then suddenly, as if somebody poured magical water on our group, they are everywhere. There is no escaping from them. No possibility of it. In Orlando we all played hide and seek. They always found me first. There are fewer and fewer places for a "slightly" overweight man to hide from a roving band of energetic youngsters. They are all very well-versed in hide and seek tactics. They never seem to tire, until they do. Then comes the fussiness and tears, then the nap. Then, a return of the energy.

We went to visit yesterday with our friends here that are fostering. It will be their first child. He is an adorable blonde-haired, blue-eyed little boy. He is standing on two feet, walking. Just as often he takes off running, his little furious waddle transporting him in any direction he chooses. One must always be on guard, prepared to sprint. We are reminded of this by all things. Everything is a potential threat. The mind becomes alive with danger and how to avert it. Changes must be made, everywhere.


After my wife and child left I stayed on to help them with their computer. She was in the other room with the baby. He and I were standing in the living room chatting, listening to music, as we often do. The phone rang. He decided to call back rather than answer. The dog howled at the ringing phone as he often does. All, merely a series of innocent occurrences. All normal.  A few seconds later she emerged from the other room, a look of slight but specific consternation on her face...