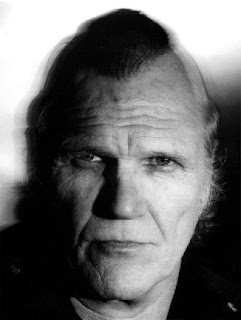 "That was the only decision there was once upon a time: what to do with the night." - Harry Crews, A Feast of Snakes

Reading some Harry Crews this morning. It fills the head with odd, gritty visions. I used to sneak into his classes when he taught at the University of Florida. Well, I did so a few times. Once, it was the day after his dog had died. A dog that he had had for many years. He was clearly distraught. He came in noticeably drunk and announced that he had been eating pain killers all night - trying to deaden the pain of loss - and that he was not going to teach anything at all that day.

Instead, he told stories of his dog, mostly. I wish I could remember the dog's name... He relayed how the only hotel chain in America that remained pet-friendly was Howard Johnson's. So, he insisted on being booked exclusively in those hotels when he traveled. Though he would occasionally demand that a high-end hotel accommodate him with the dog. He claimed that the dog had traveled the world with him. Though all of his stories were of America. The claim of a world traveling dog was more appealing. It was an image that remained.

As the class continued his stories drifted from being exclusively about the dog to various other things.

He let the class ponder this truth for a few seconds.

"Are you in this class?"

It was the only time I ever spoke with the writer, though I went to hear him speak once when he came to Orlando and had hoped to talk with him again there. But he was surrounded afterwards. It was too much effort to try and break through. I had nothing in particular to say anyway, other than that I am a fan and enjoy his work. A thing that he needn't hear any more of, I suppose. He had shaved his head into a mohawk and had colored the hair in a bright red and yellow, if I remember correctly. I question my memory now most of all.

A friend there that night told me that writers often do what they can to avoid imitating themselves. Sometimes this requires what appears to be extreme acts. They must always try to step outside of themselves, to give themselves fresh perspective on the world. It made sense, and yet another seemingly simple lesson was learned. I had thought that maybe he only lost a bet, or was trying too hard.

I've tested his theories on pornography here and there and found them to be only partially true. Try it for yourselves, and see. It takes about ten minutes.