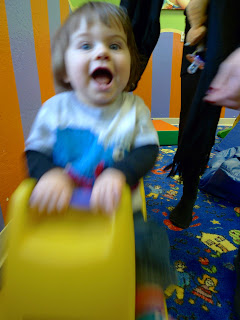 My life is too crowded - too many books, too many records, too many cd's. It all accumulates harmlessly enough, until it becomes constrictive. It begins to eat up the space that I would otherwise be living in. It's easy to forget how much stuff there is, how easily it suffocates. The cd's have been boxed up for years, since the advent of mp3's and the many weeks (about a year) of conversions (dumbly done at 192kbps rather than 320, a perpetual regret). The records, many of them, have been boxed up since leaving Florida 13 years ago. Now there is no space for them and at some point I must go through them and decide which ones will stay and which ones will go. As if my life is made of nothing but time.

The time and energy that I had to dedicate to things when I was young seems to have evaporated. Though oddly I still find time to argue religion online with people that I don't know. So, maybe it's all just a matter of priorities. I've never been very good at prioritizing my life. I indulge myself too easily, perhaps. I had thought that's the way life should be, a life of easy indulgence. Who knows.

I have a friend who has dedicated himself to something that is borderline unreasonable. He has indulged his interests to a point in which he seems to have come through the other side and is, in some ways, back to being youthful again. Perhaps that description is not accurate. It is not so much that he has recovered youth but that he is using his time now in a way that he might have preferred to when he was younger. I am jealous of his use of time. I wonder why some people end up one way and others another. Who knows. These seem to be qualities that can hardly be taught. So, we all end up the way that we end up, convincing ourselves of one thing at one time, then its opposite.

Now I fill up my computer's hard drive with images.  Thousands of them, tens of thousands, so many of them nearly identical. I shoot like I'm a Sports Illustrated photographer. 6 frames per second (though the picture above was taken with a point-and-shoot, probably around 3 or 4 fps, at best). Mostly the pics are of Rhys laughing, or whatever. I can't bring myself to throw any of them away. Almost all of them seem worth saving, to me. Though I rarely go through them. The photo library swells in size and becomes unmanageable. There are drives stacked on top of other drives. Everything demands time from me that I do not have to commit. I suppose I could stop arguing with Christians online. That would give me a few more minutes each day. I question if it would be worth it, though.

What would the big J.C. do?