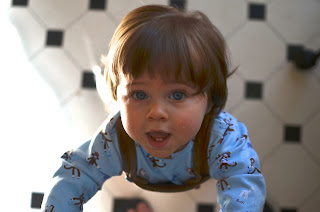 The weekend passes much swifter than I remember. It is already gone.

Not working for months does strange things to one's sense of time. Entire weeks, filled with weekdays, start to fly by as quickly as a weekend. The actual weekend becomes barely noticeable. If working does nothing else it makes the sensation of time's passing slow down some so that life does not seem to be over all in an instant. Another month of not working and I would have been ready to retire.

I return to SF today. Tomorrow I work from home. Eventually, I believe they would want me to be working from home even more, saving precious hours in commute time. I imagine a world where I roll out of bed at 8:55am, working in my pajamas. At 5pm I go to the gym. I am at the local pub by 5:30. Perfect.

No. I wake up between 4:30 - 6am most mornings, rarely ever being able to go back to sleep.

Four years ago Rachel and I were not dating. We were, however, at a friend's apartment together for the evening of the general election. The results came in, Obama won of course, and everybody in NYC was very happy about this. There were the celebratory sounds of victory throughout the streets. He rode in on the platform of change. There were waves of electorate ecstasy rolling through the apartment that night.

I was so fed up with politics at the time that I made the simple comment that Obama will do nothing to restore the balance of power that Bush had worked so hard to de-stabilize. Rachel's hatred for me swelled within her. It rose to an accusatory crescendo. She denounced me, claiming that I did not know what I was talking about. I believe she even rattled off one or more of his campaign promises. Her face was red, she was just shy of screeching. She was a believer in Obama. I was not. I was only happy that McCain had lost because I felt that the country had suffered enough at the hands of the right. It definitely was a time for a change. I just didn't feel that Obama was the guy, though again, I was happy that the right had lost. It's worth saying twice.

I had hoped, at the very least, that Obama would do something to advance the idea of human dignity, to do away with the torture of water-boarding, to correct some of the wrongs made by the Bush administration, to repeal The Patriot Act, etc., etc.

(Man, was I wrong. And here is a follow up article. Anybody, politically inclined, that considers themselves a democrat should read those articles very carefully. Several of the links found within those articles are interesting as well.)

Alternately that night, I thought it was time that either a black man or a woman made it into the office of the presidency. I understand that many people say that this is both racism and sexism. Bullshit. I didn't want him to win because he was black. I merely thought that it was a good sign that at least a fair portion of the nation was able to overlook his color and vote him into the most esteemed office in the country. Believing that things are progressing and improving, that the nation is moving away from racism, is not racism itself. Anybody that claims otherwise is a fool. This fact requires no additional evidence.

But, like many others, I will be happy when the election is over. There is no good that will come of it, for me. The "lesser of two evils" argument can be made, I guess. But I'm no longer quite as convinced that one is any less evil than the other. One, we already know the wrongs that he will advance. The other is already a stale mystery evil. Because I live in a state that will go to Obama it gives me the chance to vote a third-party candidate, which I will do, even somewhat against my conscience for other reasons. The candidate has no chance of winning, so it allows me to vote against both of them without any overall consequence. It's too bad more people don't feel this way, there is some power in dissent. But people want to vote for a winner, and there are only two possibilities. One good, one evil; I'm told.

It's as if all of America is at the dog track, watching the big board with excitement, clutching their lone voting ticket, eagerly waiting for their quiniela with perfect 1-1 odds to arrive and magically, for once, somehow finally payoff.