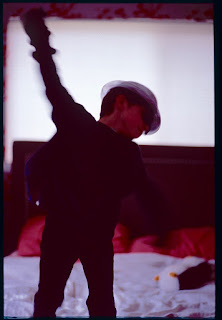 Do not read this post if you wish for your own happiness to be the result.

Yes, it's true, sickness is boring, though it was all I had to mention yesterday. There is little to tell, and what there is does not qualify as being worth telling. Only the worst people wish to listen with interest to the ailments of others, or advance their own onto others. I've known them. They are awful, boring people, incapable of passion or romantic love.

That made me laugh for reasons I should not admit to. Or rather, I should only remove the proper noun from its telling.

I used to know a woman who would endlessly prattle on about her various headaches and body aches and other personal misfortunes. She would sometimes try to universalize these afflictions by waiting until someone around her made the mistake of mentioning one of theirs first before launching into her own history of mysterious pains, both acute and very dull. A Debbie Downer if ever there was.

She was desperately seeking attention of a type that she could obtain neither naturally nor otherwise, so she would settle on whatever she could extract from others without verbal or physical consent. We were all forced to suffer her advances, both men and women. If she were a man, in this current climate, then I'm certain that she would be the object of collective scrutiny by now. Perhaps me being brave enough to come out here now and tell my story will help others to also be brave and tell theirs. She would trap us in places where it was difficult to escape then project a discussion of her maladies with the seeming intention of deriving pleasure from our discomfort. A real serial dinner deflatist. There were times where I felt as if I had been drugged and I would come to and she was just finishing up her awful litany of physical displeasure.

You may think that I am kidding, and in one way I am, but trying to seek affection in unpleasant and even non-consensual ways is not a behavior that is exclusive to men, nor are they the sole cause of bad sex, as some women seem to be suggesting from the recent embracing of the Grace testimonial, which should be treated as a diversion rather then the thing that also really needs to be talked about now. Yes, I understand that men can be awful, but the attributes of being disingenuous or dishonest are not qualities that men exactly control the market on.

That's right, I'm telling you that women really do lie, and they can also be pushy and demanding. When you encourage all women to believe they are victims then it should surprise no one that they will start to see and frame themselves exclusively as such, which will in turn affect how they understand their own predicament as well as their responsibilities to others. Self-defined victims are far less burdened with their own moral accountability. It's a form of feminism without courage. Like when a woman will auto-cry to "win" a potentially difficult conversation that in no way requires the use of tears. It is a fallback mechanism of feigned weakness to take conversational power over another person. The scripted arrival of temporary emotion when the only other option is to admit wrongness is not honesty and is not victimhood, it's bullshit, and every straight man I know has suffered plenty of it. Fuck all of that, I say. It's emotional bullying.

Oh no - Oops. I should stop. I just realized today is the Women's March, a political rally that I very much do support. Women should organize and vote with their interests in mind and they should seek to elect representatives who will protect their interests and advance equality for all. I don't have to agree with all of their individual demands to believe that democracy should be the solution to their problems, and the effective satisfying of their social and political claims. I would hope that they would include demands that are for the collective good of all, as embodied in the ideals of equality and justice. But that is my wish for any movement, it does not also need to be theirs.

I feel the same about Christians. If they want laws to reflect their values then they should vote, and they should accept the results when and if they lose. We should all feel some version of that. If our needs are out-voted by the needs of others then so be it. No laws should be put in place that are unjust, but we should all learn to accept that not everyone shares our values, and if you're going to self-identify as part of a group smaller than "citizen" then accept that you have already agreed to your own self-limiting definition and any political restrictions that doing so might engender.

Are people too dumb to know what the word engender means? Probably. I could use another word, but that one makes me happy because it seems to suggest something other than its meaning.

There is only one group that I truly hate and would vote to subjugate to cruel work camps: the willfully stupid - those predisposed to intellectual laziness or denial.

Well, I should be more careful, I could end up in America's financial Siberia with such admissions.

Ok, done with that portion for now. My favorite writer on the subjects of feminism and the difficulties of sexual politics is Laurie Penny (<<< her latest post linked there). I don't agree with everything she writes, of course, but I feel as if she approaches things with a very passionate honesty. Much more so than so many of her contemporaries. She is almost as much fun to read as she is to disagree with, though in large part I do agree with her, even when she is at her most revolutionary. She comes very close at times to being "anti-man," but she seems to be aware of framing her arguments in an anti-male behavior kind of way, which speaks an important kind of truth to me, one that I can hear and embrace for anybody. If a man reads her writing and comes away feeling as if her brand of Resistance is about you, or an attack on you, then maybe you're a complete shit-head and you deserve to be set upon with ideals that counter your assumptions. It is very tone-smart writing, yet is also deeply irreverent to the status quo, so I love her. She is smart, impassioned, and not wrong, which hits on two of the three attributes I look for most in any writer.

I can suffer a writer being wrong - especially when that fault seems to only be the occasional too-careful selection of supporting facts - as long as they're smart and also impassioned by what they believe then I can overlook a lot. Being right has never been a requirement for me, but if you're reading here then you already know that quite well. I could easily spend the next ten years going over these posts and disagreeing with them, but why, when I could also spend the next ten years being wrong about other new and exciting things.

Well, if I can recover my sickness enough then today is also the day of the Pine Derby Race.

There is nothing very fascinating about diarrhea, but let's talk about it for a while and see how we all feel.

By the way, a quick little aside: nauseous means to cause the feeling of nausea. So, if you tell people you are nauseous then accept it when they may just nod and agree with you, like my dour acquaintance described above. Contemporary definitions have adjusted because people have misused the word so often and to such degree, but nauseated is the word you're likely looking for when you are experiencing rather than causing the sensation.

Be careful when describing your maladies to me. My favorite type of sarcasm is usually only for one listener in a given group, which is why people sometimes struggle talking to me: they think I'm not making any sense, which is is of course also sometimes quite true.

After those pedantic semantics I will spare you my thoughts on liquid excrement. I'm certain there are some who will be disappointed, but what can one do, really? There is only so much time in each morning and I can not possibly satisfy the digestive curiosities of all. I must focus on my general readership.

Now, what is the Pink-Bismol and how does it relate to today's March?

Well, I'll tell you: there is no relationship beyond the use of the color pink.

- One is meant to suggest the pussy-power of femininity and that those thusly adorned with knitted battle gear would not have their pussies grabbed by celebrities - the wearing of which virtually guarantees this. It is a vague type of protective witchcraft. Its power emanating from its sympathetic magical connection to the thing it is meant to represent. This is of course a definition which derives from cultural anthropology, and not a slur. They wear the magic pussies on their head in an enveloping, declarative, and protective manner - it is a sign of unification for all those who have pussies, while sending a potentially conflicting message to those who only identify as women and wish to one day wear one on their heads, or possess one elsewhere. Its imitative apparel power proceeds from the sexual organ to which it corresponds.

I derive what might be considered a perverse pleasure by wandering around these rallies complimenting women on their chapeaus. This works pretty well until I ask if I can touch, wear, or sniff them. Its power is not intended to be misused or shared in this way, even if I do get the occasional laugh, smile, or smirk. Those are the very rare exceptions. So few seem to have a sense of humor about wearing symbolic genitals on their heads, where the symbolism would become quite metaphorical if they would just lower theirs onto mine. Perhaps I'll stop by the March today ambivalently wearing a silk purse, in solipsistic solidarity.

- The Pepto product uses pink only for brand recognition.

I may walk around at the Pine Derby Race today guzzling from a nice fresh bottle of Pink-Pepto, to show my allegiance with the cause of reclaiming the word pussy, snatching it away from the lips of famous men everywhere. I suppose I could call it "Pussy-Juice," but contextually I understand how some might find that usage problematic. Perhaps the meaning and intent of the color pink can not be appropriated by a man merely hoping to treat his own diarrhea.

You gentle readers, must always decide for yourselves. You would not want me suggesting how to think or feel.

You can glimpse how I might get it all irretrievably wrong, every single time.