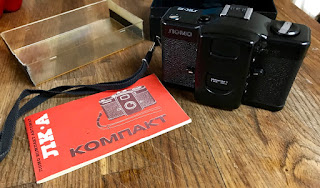 I am aware that the Lomo craze is nearly over, at least for the coolest of kids, but I'm still a sucker for the international anachronism of it all. Mine arrived yesterday from the Ukraine - an original Lomo with Russian glass. So, I'm hipper than I might be otherwise. At least more than I would be with the newer, Chinese model (LC-A+), one that likely functions better. Though this was advertised as an LC-A+, it is most definitively not. I suppose I could leave negative feedback on Amazon for this poor ex-communist ingrate, but he was very nice through the entire buying and shipping process, assuring me without prompting to not worry, that the mail from the Ukraine is very poor but that it would arrive as promised, and not to worry, not to worry, not to worry, that I should check his seller rating and feedback on eBay to confirm what an upright guy he is in this and all other regards.

Soon, everyone will have public buyer and seller feedback, that's how we'll know whom to love or merely date.

From my limited understanding... it is the original Russian glass that added so much quirky value to the camera to begin with. So, I can tout that one quality, at least until I get my film back to scan. So far I think I have been choosing the zone-focusing distance poorly. I read the English version of the Lomo manual only this morning and the very simple system makes a bit more sense to me now. The paper manual pictured above is cool because of the Russian text, but is useless to me as a technical document meant to foster understanding between nations.

Sorry, I grew up as a child refugee of the cold war. I spent my puberty envisioning various nuclear fallout scenarios, always imagining that I was somehow able to make it home just to let mom know that I loved her, to squelch any lingering doubts she may have had.

I am often very sweet in my heroic childhood fantasies. Though, I saw an article recently warning women about dating men like me. Few things are as sure a sign of danger as is occasional boyish sweetness. What could be more suspicious. It seems that complicated men - those who experience a full range of human emotions - are virtually ticking time bombs, I read with surprise and delight. The article seemed to be both cautionary and instructional. Its intention being a tutorial on how to know whether a given man might be enlisted to the service of your pleasures and needs. I searched the internet globally for similar information on women but my research drew me to overly demonstrative examples, where perhaps the request for detail was being taken too literally.

There is no winning for either men or the women now. I miss the time when we were allowed to like each other, without all the ancillary assistance from the romantic correctionists, the ideologues of love. It looks as if all of American society is finally going to have that conversation we've always needed. Thank the lucky stars for that! I thought we were on the verge of a breakup. It turns out that women don't want to split up, they just want men to finally get the help that they so desperately need. It's time that men address their maleness issues, as females. Details forthcoming.

If things do not work out between Rachel and I, again, then consider this site a comprehensive list of my romantic expectations, ladies. I have needs, too.

Rachel and I have done pretty well recently at treating each other as partners, as equals, though I'm sure that a careful feminist inspection of our understanding would reveal that neither of us is happy by getting only half. Certainly there is a gender gap in there somewhere. There must be, the dynamic includes one evenly paired oppressed and oppressor.

I'm still the arch patriarch around here, aren't I?

Speaking of, I went out last night with Rachel and Rhys. It was Cato's going away party. He's off to Berlin for a new job. So, you'll never hear about him again on this site. He is dead to our editorial staff. His new name, if mentioned here at all, will be Can'to. Pronounced like one of the Ezra Pound poems. Or you can also use Cannoto from its original Italian, if you shan't possibly bear another contraction.

Rhys drew him a very sweet (and I guess as such, possibly dangerous) going away portrait, one of mom as well, in a book that was passed around that we were meant to each sign. I think I wrote Muchos Besos or something equally inane. Because what says Berlin quite as well as does Many Kisses written in Spanish? Beaucoup de Bisous.

Another of my close friends was there last night. He is also leaving SF soon, after 25 years or so, to travel through India for however long it pleases him. That represents the last of my three close friends that were living here when we moved from NYC over six years ago. Ah well, I have friends in other places if the urge to travel strikes me - three continents worth. Perhaps if I can stop buying useless and discontinued Russian junk cameras then I could set aside some money to travel. I have been eyeballing an Olympus XA-2, also.

After my sabbatical things will be different.

That's just what my other friend emphasized: without a plan in place then that time will disappear very quickly. Time evaporates when it is left to roam in the moonlight. He urged me not to just wing it and hope for the best. He is of course right but I can still resent his lack of faith in how I mismanage my time. One must be willing do a tremendous amount of nothing if there is ever hope of doing anything that glimmers. That is what I've learned. It is my modest life lesson to you: do nothing and wait, something will arrive, you want to be relaxed enough to hear it calling when it does. Working produces the types of thoughts that mostly only workers have - ponderous, either productivity or escape driven. The best things arrive unexpectedly, often from the deepest state of repose, from a leisureliness of spirit and time. Not necessarily tranquility, but when released from the harassments of responsibility.

Who knows. Perceived laziness might be the next social target. People will openly denigrate it, though on new grounds. A class of people will emerge associated with the trait, and they will be mocked as somehow being less than expected, less than what the future of this country needs. If rednecks and the elderly are safe marks now then it does not take much to expand that program to include any who willingly choose to produce or purchase less. What could be more like the elderly and the southern unmotivated than to willingly work less out of a conscious choice.

The days of autonomous leisure - at least that not caused by independent wealth - are approaching their close. Liberals will come to the immediate defense of those accused of being lazy but they will, as always, greatly miss the point and only make the issue worse by insisting that the intention of the accusation is exclusively racially motivated. They won't be entirely wrong, they'll just continue to be entirely insufferable.

I want to live "off the grid" like anybody else, but still require a robust broadband internet connection. I have needs, America.

My only concrete goal for my time off, so far, is to check and see if any of my past lottery tickets were winners. Once I've confirmed a single winning ticket then I can finally get down to the sticky and unpleasant job of organizing my life. That's what it would take for me to organize my life, I think: an unexpected bonanza of recreational wealth.

I initially wrote to reorganize my life, but felt the bolt of guilt at the lie of it. I have never been organized. I can organize a book shelf to my satisfaction, or in accordance with the alphabet, or to generally accepted categories in style, purpose, region, or chronology. I can do the same with crates and crates of records, but not to my daily routine.

If only my dreams were alphabetical.

One of the reasons that I love my current job is that there is an inherent organizing principle to it. I seem to function well enough when order is instituted by an external demand. What I seem to lack is an internal version of that same principle. My life is that kitchen drawer that exists in every home, filled with objects whose meaning and usefulness are blurred by their proximity to other oddities of likewise indeterminate use. So many things that I love are not connected by their uniformity, but rather by their oblique disorder, how they seem to fuse their disparate shapes into an inseparable and useless whole. It is the place where form destroys function.

Always there are the important life questions, Why are there balloons in the drawer with scissors?

I'm happy just reading for days on end, and can even commit to near daily exercise, but when it comes to seeing a self-generated project through to completion I become overwhelmed and no longer cherish my independence. I am cursed by a mind that roams, and I'm not even sure if it's mine.

If I don't have somebody to either compete with, impress, or shame through comparison with my imaginary talents then I quickly lose interest. This might be a character flaw. I haven't been able to set aside the time to look into it any further.