"I've got to leave before I start to scream" 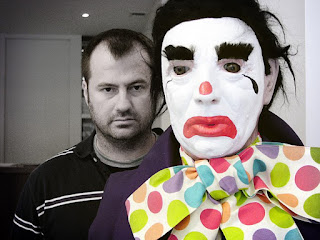 Like CS, there's not much to write about lately. No new stories to tell. This is why I've been scratching at the past, which might be fun for a little while. I can only relay the details of losing my virginity so many times, though. Best not to exhaust that as a resource, else I may never get it back.

I don't remember many details from the first time that I had sex, but I remember the second time very well, which was the following night. I do remember coming home after the first night and walking into the garage entranced, as if drugged, thinking that somehow my father who was there piddling in the garage might know, might be able to sense its narcotic effect on me, as if the hormones that helped me arrive there would then turn on me and betray my carnality to an otherwise occupied parent. I must have wanted him to know.

I knew that things had changed; not entirely sure what that would mean. I only knew with certainty that my love for her would last forever. That part was tattooed to the post-coital mist. This love was why I was here. It explained everything.

I suddenly had a partner in secrecy, one from the other team, the strange and magical tribe from across the summer lake. She was immediately superior to all of my previous boy-child friendships. She could conduct wonders, as if her breath was comprised of helium. Her flesh the only warmth that mattered. My young mind learned quickly to understand and believe in the spiritual power of women. That one such as her, so young and mine, could pluck me without struggle from my mother's nest, surprised me in the way that I had been anticipating. In so doing she of course changed the universe forever, merely by wordlessly indicating that she might just prefer it a different way.

I had not chosen as carefully as I could have perhaps, though every option was being pursued simultaneously. It was a matter of social dynamics colliding with the mathematics of opportunity. We seemed in the right time and place. Twitching with glandular impulses, mostly directed towards one another, our destinies combined for a handful of minutes at a time - two silly creatures grasping at passions. She, the little lovely, self-splayed for me. I, the eager convert to her world religions. I could feel myself disappear inside of it, returning to life as if reappearing from within a dream.

I would do anything to partner further with the object of my destiny, and was eager to demonstrate this. My decade and a half of years accumulated became hers. I handed over every part, believing each piece to be of value to her. She disabused me of that notion quickly enough. So, there were other young women, girls really, after her. They arrived in a sequence, mostly a serial fashion with an occasional paralleled transition period, where my undying love for two of them overlapped briefly.

I barely remember her best friend at the time, whom I also got pregnant. Two in my first active year, which is somewhere above the speculative average. The only thing I seemed to understand was the most basic portion of it, the fundamental mechanics of where things were meant to repeatedly go. Two abortions worked in tandem to help flesh out my understanding of sexual consequences. I learned, though only reluctantly.

Women don't talk about abortions much and as a general rule neither do I. It's not something I bring up during picnics. Herpes, also, is a subject better left for the talk shows. Why ruin an otherwise pleasant afternoon? That's my attitude. Best not to share your diseasedness. But this site isn't meant to be a picnic. Eating lobster with your teeth is a messy business.


I wrote a piece one morning a week or so ago that went unpublished. It recounted some memories of that time, which is why they're still bumping around in here I suppose. I took too much of a posture in it. I wondered openly what my two children might be like. They would both be in their early to mid 30s by now. That fact alone is inconceivable to me. Not painful, but empty, distant of necessity.

I have friends that would be younger than my own children now, and then again it is just as likely that I wouldn't. In fact, it is most definite. The What ifs... of speculation become less buoyant when nearly fifty years of experience are roped onto them during some misguided lifelong getaway attempt.

Also, few people encourage men to explore their feelings concerning the decision of a woman in this regard. It is, of course, her decision. So the man is expected to be silent about it from there on out, out of respect for her privacy. Such is the far reaching power of another's privacy. Women are Earth Goddesses, all the way up until the time they decide to excavate. It takes some of the shine off the myth of nurture, so it is best to maintain lifelong discretion concerning the facts. You don't often hear men speculate about what might have been, if only... etc. It does something odd to the ideals we tell ourselves, makes them less enforceable.

But I do wonder sometimes, even if I am incapable of holding that wonder with any seriousness, or for any period of time. Or, maybe I am doing it right by only pretending that I am. It's an uncomfortable thought. I bet I could even get misty eyed about it if the conditions were right.

Who knows. I could have had two daughters somewhere out there in the universe, both by different teen mothers. One like Tiffany Trump, only older. The other, a genetic hybrid between a young Ann Coulter and a current day Casey Anthony.