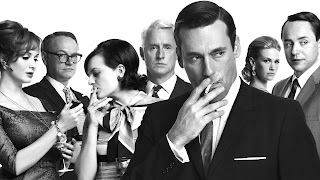 There was a 65th birthday party last night in the city for a man that Rachel works with. It was Mad Men themed. The birthday boy (65 yrs old) did resemble Roger Sterling quite a bit. So we dressed up a little bit along those lines and went out, to help make America great once again, like post-war great. The entire time we were there I kept praising California's governor, the inimitable Ronald Reagan. Rachel wore a stylized dress, with pearls and gloves, that make her appear to have stepped right out from a page of the 60s. I wore a standard blue suit (my black Hugo Boss was cut for a lighter man than me). I brought a manual Nikon film camera, assuming most people would not know the difference between the 80s and 60s, at least with that technology. I was right. Our outfits worked, I think.

It will take me a little while to get the film processed and scanned, then perhaps you will see some results from the night here.

Well, since it was our prom night, I'll give you just this one. Rachel encouraged me to delete it, so I'll post it here before she can erase it from my phone...

In keeping with the times, I fluctuated between telling everyone that she's my office affair; then later, after a glass of wine or two, she became my secretary; by the end of the night she was my wife, a very happy housewife, my second. This was to help give the evening some much needed chronological perspective into the arc of 60s love.

Not everybody was off getting shot at Kent State, you know.

That was a woman's natural trajectory then: from a secret to secretive. Don't be mad at me, men. I am angry at the errors of history also, probably angrier than you, I had to live through some of it. If you'd like to compare our comparative levels of outrage, just let me know.

Privately, in one of our early Bad Men episodes, I pressure her into getting an abortion while we smoke cigarettes and drink martinis she's made us at her studio apartment, well after the decent hours. The happiest music of the time playing lightly on the background radio:

This would be very bad for both of us. The timing's just not right. What would your parents say? Your father? If we're going to do this, then we should do this right. Now's not the time. You know this.

That's all that I could remember about Mad Men and as much effort as I put into my characterization. I offered to pay for everything, of course, because I am nothing if not a gentleman of the times.

The important thing is that no one finds out. We should protect your reputation.

That's the new brand of equality: women should pay for their own abortions.

No, that's hideous. The costs should be split evenly.

One day not very far off abortion might become illegal again, because that's what people seem to want. Many argue that it was never really an issue of privacy. Sonograms have changed how people feel about Roe v. Wade. That ruling has rested on a tenuous legal pedestal, one easily toppled by a court that already leans. Christians will capitalize on the application of science, and will once again move towards re-instituting God's law in America. The Supreme Court is better prepared to reconsider the issue now, you see. When people demand the sanctity of their things they allow themselves to overlook what is sacred to others. Life may one day soon be precious again.

Then... it might all start with the case of a woman getting caught having a famous man's child illegally aborted without his knowledge. She will be outed for it, prosecuted and persecuted, then the backlash pendulum will swing. We'll be encouraged to clear the air concerning the evils of sex.

Do not be so naive to believe that necessary moments like the current one can only be the harbingers of future good things. Everyone should be in suspicion, if not fear, of sudden consensus in matters as complex as sex and mating. I'm not talking about sexual assault here, at all. I mean the vague or specific assertions being made that one half of the mating process is deeply iniquitous, by their nature.

Imagine the things that can be easily said, with only a slight change in social temperament:

Men were robbed of their agency in the matter. There was never any consent to abort.

It doesn't matter that it was legal, it was wrong.

People rarely seem to see where demands of blanket justice lead. It doesn't require much imagination, only some historical perspective, to see how easily these things can go terribly wrong, and too often have.

If you believe that the forces that put Trump in office will just accept that as their high water mark victory, and will now back off, self-satisfied with their singular accomplishment, then you have learned nothing at all about the dangers of self-claimed righteousness when matched with the fear of otherness.

I'm wary of those who insist on bringing the light and clarity of condemnation to the private complexities and ambiguities of human experience. Those whose task it is to finally "expose" the hidden moral horrors of humanity; of whom one group has only suffered, the other only perpetrated; those who have no hesitation snickering condescendingly at the obviously glaring faults of yesterday. Those types of virtuous divisions are always self-serving and make it too easy to conceal much duplicity in purpose. Things are rarely less true than when universally accepted.

What was it that old Clash band told us about such things:

But I believe in this, and it's been tested by research
He who fucks nuns will later join the church.

Well, I had not expected to trod down that well worn path again.

I'm writing from habit, as is my occasional ritual.