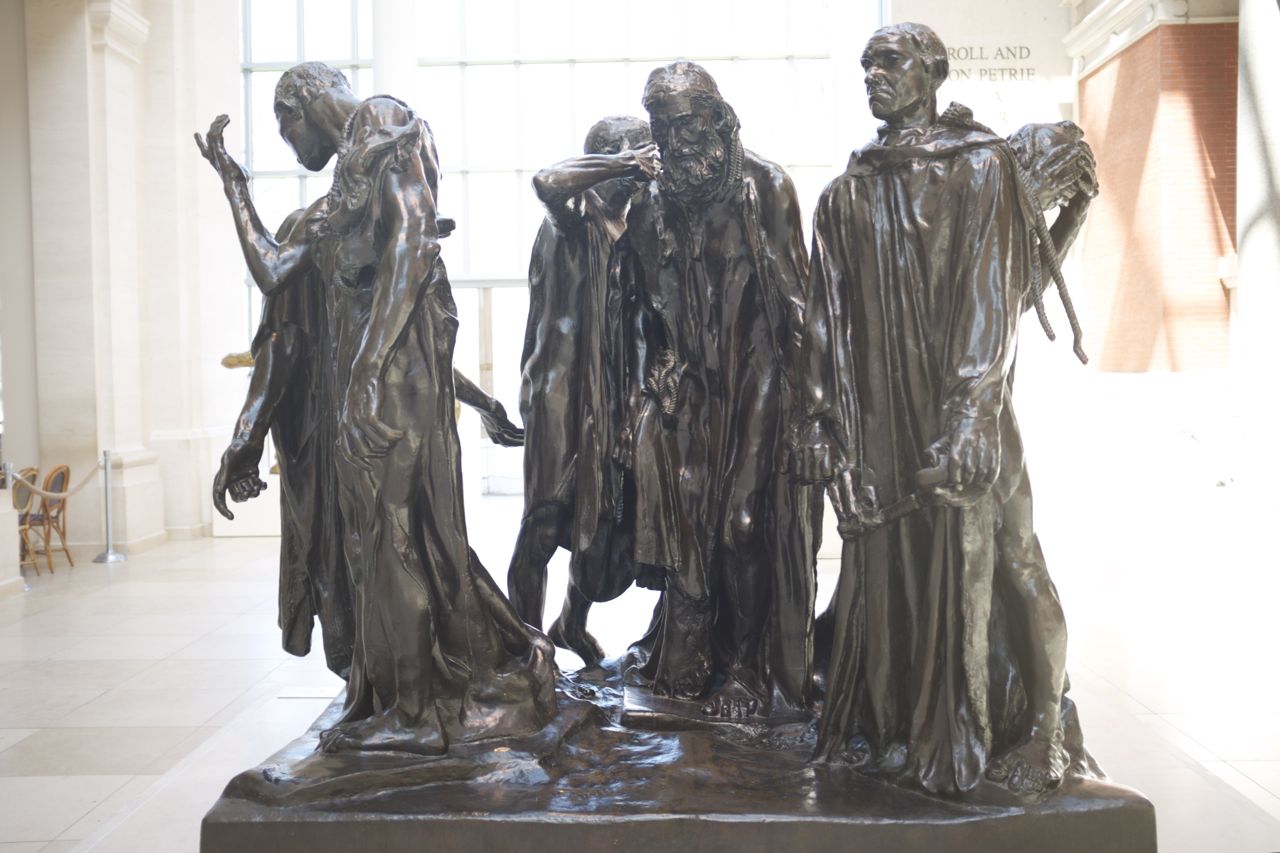 (The Burghers of Calais, Auguste Rodin)

Rhys was excited to see me, and I him.

We all went for a walk when we awoke, to let Barkley the pup do his business. The bright morning said summer but the wind still speaks of winter, not even in whispers but in full, long, deep breaths.

The normalcy here is as I expected, without any deviation whatsoever. I will, at least, be able to return to the gym regularly, to try and recover something that gets lost along the way. Vitality, but also something else. It is not only about gaining, another thing falls away; a thing not needed, a thing not desired.

The boy was quite excited to try on the Buzz Lightyear pajamas that I brought home for him from the land of such things. They were too large, though he didn't seem to mind much. He ran around the house exclaiming, To Infinity and Beyond!... which sounds about right. He wore them today to day-care.

Something strange has happened while I was gone. I have lost the taste for coffee. I guess I wasn't drinking it regularly enough and now it tastes to me as it used to, which isn't very good. I should take advantage of this window of opportunity and quit. I probably won't. I'll force through and be a coffee drinker again anyway, in spite of the odd chance this window offers.

I had thought that perhaps it was just the different brands that I drank while away. But no, I just returned from Starbucks, and their brand (my usual) also tastes "off" to me.

This would be a good time for me to return to drinking teas, at least. Earl Grey.

I just got an email from Tumblr saying that my site, this one, has just turned 3 today, and wanting me to wish myself congratulations. That sounds about right. My life is regulated by faulty algorithms with bad data. A 45 year old man finding attention and affection for and from himself through leveraging various social media platforms towards one another. Two Facebooks gazing into each other's profiles, with no poking involved, just an awful lot of liking.

Having barely touched my coffee I have another rare opportunity: going back to sleep. Nobody would know. I have the day off from work, my last of its kind for a while.

I crawled into a familiar bed and turned on my laptop, to find the image above. It has no special meaning, except perhaps only to me, as a reminder of where I just was, and maybe that the figures were spared from certain doom, though you would never know that just by looking. It is the moment when they believed they were approaching their collective eternal fate.

I will be as still as the statue.