This was my advice to a friend who traveled to India. Turns out that I am much wiser, and yet still more practical, than many. Ascetics, swamis and wandering charlatans be damned. Their advice is not, and never has been, nearly so useful as mine.

She got a case of what is commonly known as "Delhi Belly" and is currently taking a 44 hour train ride to try and cure it.

All of us here at seanq6.blogspot wish her well, of course.

Sorry, I just watched The Colbert Report early this morning. That last line was facetious.

I am on the verge of finishing "Rome" by Robert Hughes. It's quite a story: The Eternal City. Hughes just covered the dual-era of D'Annunzio and Mussolini, Fellini should just about wrap things up. Then I'll be back to a work of fiction, literature. I've decided that I like Jack London much more than I had originally thought. I was just being uselessly contrarian when I moved here. I keep picking up a collection of his and reading bits and pieces. He has his moments.

I recommend the "Rome" book. Like Oprah, I have made these little golden stickers for the books in my library that get my approval. It is only a matter of time before Amazon sends their spies.

Speaking of Oprah... the scale at the gym is finally cooperating, after much negotiation, argument and effort. I am well past the halfway point to shaving. Did I mention that here? As a device to remind myself not to eat and drink so much I decided that I would not shave until I lost at least 10 pounds. I've dropped about 5 since then. It took me three weeks before I really even started changing my habits, but I got serious about it last Sunday, sort of.

I have limited myself to two glasses of wine (or pints of beer) a day, no fried foods, no dairy products, and no soda. I've also been working out, cardio and weights, about 4-5 times a week. When I tell you that there's a miniature sadofascist lurking inside of me, I do not lie. But do not worry, he is only a thinner version of me. It is the source of all of my spiritual wisdom (referenced above).

I have a full beard now, like all great and trustworthy religious leaders.

If the sun comes up before I'm done writing this then I'll take a picture.

Here is me, approximately, before the diet, slightly after a shave: 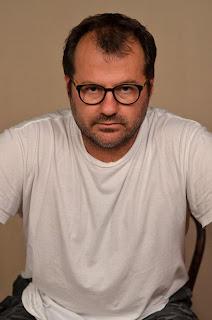 Keep in mind that this picture was taken in a studio with lighting that is meant to be, if not at least flattering, not harsh to the eyes. It hides some of the unpleasantness of excess fat.

Do you know what's great to work out to? Punk Rock! (and post-punk).... I have been re-discovering a lost era of my life: Stiff Little Fingers, Television Personalities, The Pop Group (admittedly a bit weird for working out, but animalistic), Meat Puppets, The Fall, The Mekons, even Siouxsie and The Banshees (the early albums). Normally when I listen to this music it makes me animatedly self-destructive but on The Nordic Track, well... it's a whole different story. I want to be drug skinny again.

Oh yeah, the current picture. I almost forgot. Let me wait until the sun comes up. I'll be back.

Well, I have a few minutes before the gym opens. Let me try some random thoughts out:

The crusades were less than a thousand years ago.

Less is more, but in LA less is a little bit too much more.

I'm working on a new line of open-toed panties.

People with disabilities really aren't like everybody else, are they?

Public toilets: I don't want to live in a world that makes me beg, or fight, for toilet paper.

Okay, that's it for now. 10 minutes before the gym opens. I must get ready.

It occurred to me that I burn 420 calories on the exercise machine in 20 minutes. I like to keep my vices aligned, etc.

And here is today's beard, the one that brings the wisdom: 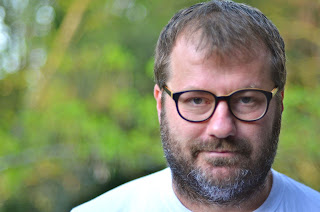 
I'm not sure why I look skinnier and more rested before I started the diet and exercise. I will meditate upon it, and see what wisdom the whispering winds within me bring.