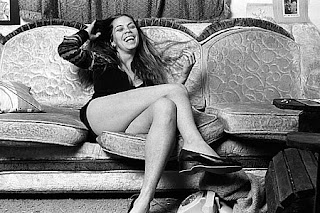 That's just what I want, other things might happen. It's the hat and haircut that provoke this feeling within me.

Well, I really like the way she sings the song, anyway. It's done quite spritely.

And so I wait; to recover from lingering illness; for Rachel and Rhys to return; for my new camera to arrive; for what else, I do not know. I'm committed to having an adventure of some sort today. I have been bed-ridden, or at least house-ridden, for days now. I want to take a drive, maybe a hike, read a book on a hilltop, fall in love with the sky, sing songs out loud to the hills, serenade the puppy.

I put on an all acoustic Rickie Lee Jones album after the indiscretion above. I don't even know if Rickie Lee Jones has any children. Her parents were vaudevillians, a word I have always liked, though one that is challenging to use often. When I was a child the word evoked many things for me. Burlesque eventually replaced it.

I'll admit it, the only reason I listened to Rickie Lee Jones was because she had dated Tom Waits, but she's good, very good, even great at times.

What's a Burlesquevillain. I want to meet one of those.