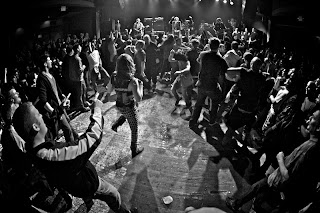 Look at that. I asked the photographer from today's image if I could use it for the site and he replied right away: Sure, thanks for asking. Perhaps I'm finally growing up. One day I'll look back and credit Bad Brains and Gregg Greenwood for all the positive changes in my life.

I had done a search because I had just listened to their debut album at the gym. By the fifth song in, "Banned in D.C." when the guitar takes off.... well, it's as great as anything I've ever heard before. I've fallen in love with punk rock again.

It really makes me feel something, a sort of purging rage. It is exhausting, and meant to be. The thing about punk rock is that thumping in my heart. The fear, and desperate want.

I sat and looked through Greenwood's site for about a half hour. Swans (without Jarboe, of course). I tried to play a Swans' side project for Rachel the other morning, World of Skin. She was having none of it. Suicide music, she wordlessly suggested with the roll of her eyes, followed by the look of concern. Wait 'till she gets a heartful of Jandek, I thought.

Rock and Roll looks great in Black and White. The picture above seems as if it is going to jump onto the floor.

That is what I wrote last night.

More NyQuil and a long night's sleep through the rain. I dreamed of oceans, of dropping lights into the depths while already submerged, watching them disappear. It is dark here and the sound of the rain falling is pleasant. The house is still, with only a few quiet moments left before it comes to life. The coffee machine starting informs the specific moment. The dreams from last night already resemble themselves, disappearing into the darkness.

To my friend that accused me yesterday of not properly documenting Spring: It is 48 degrees and raining.

Another buddy, writing at an undisclosed location, a bunker site, mentioned James Salter's new book. I had pre-ordered it, but something went wrong. I checked Amazon this morning and the order had been cancelled, the credit had been used on other books.

I am experiencing premature senility. It seems unfair. I had to wait longer than most for puberty, and now this.... Stolen boxes of books that turn out to have been inadvertently thrown out by me (One final note on that: how in the fuck did Frank Herbert's "Dune" series survive while Moby Dick didn't? What sick fevers possess me.).

My own thoughts are all the mystery that I will ever need in life. I am perplexed by the simple enigma of self. Who needs horoscopes when you are adrift within your own life?

So, I thought I had ordered the James Salter book. Oh, well.

Rachel and I have one of our bi-annual anniversaries coming up. Maybe she'll take me to a Bad Brains show.