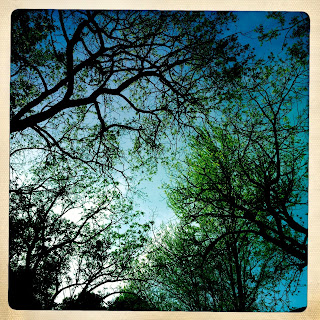 Fuck. Sick again. It is true what they say about having kids: you will get sick more often. Kids are like miniature sailors, delivering germs from ports afar. It's as if we are living in a subway car. I escaped the last round of illness, somehow. It is a mystery that nobody can quite fathom. Everybody in the world was unwell with the dreaded vomit flu. Not me.

Not this time. Rachel and Rhys are also both sick. I look forward to nothing but recovery. It has even robbed me of healthy people to whine to.

NyQuil failed me last night. The magical wonder potion helped perhaps but did not heal. I tossed and turned all night, fighting my way free from its murky haze, as a slow-motion dreamer escaping a cherry whirlpool.

Rhys has a few words in his arsenal now. "Apple" being one of his favorites. He has nearly perfected it. Funny, that. He seems to make no silly connections with the fruit to immortality, sin, or The Fall of Man.

But man, he sure does like them. They are only "forbidden" for brief seconds at a time, through the limitations of proximity, once he has affixed his interest on one. Those moments must stretch out towards eternity for him, as his arms reach and grasp to close to gap.

Spring is here. There is nothing useful to say about it.

It is nice, much better than winter. It always is.

I've said this before, but winter here lasts much longer than it should, almost six months. I suppose when you endure the terribleness of a winter in the north-east any signs of spring are welcomed joyously and by all. Here, the season is not nearly as terrible so it stretches out further.