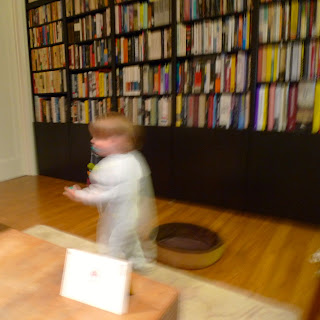 When Rachel got home yesterday I relayed the bad news about the camera getting stolen, explaining that I was going to have to smack a crackhead in the face with a shovel now, and that we don't even own a shovel, we'll have to borrow one, that it's all getting too complicated.

She said that the camera has been in her car since Monday, she moved it to the glovebox so it would be safe. I ran out to the car as if it was Christmas morning and I a newly awoken child of 5. Sure enough, one of them had snuck out of the city, broken into our car, probably took a nap there, but then planted the camera in the glovebox for me to find. Magical.....

I checked the pictures, they were all there. There were none of anybody breaking into our house and sticking our toothbrushes up their butts, or brushing their ball hairs with them. There's that to be thankful for. I hear it's a real problem.

So, the mystery was solved before I had even written up the full report. We can close the case on that one.

No crackheads will die today.

I was going to write about the Sigur Ros show I went to see on Wednesday night but I don't have it in me this morning.


Rachel and I must plan a trip soon. The summer will get away from us otherwise. One of the main reasons we moved to the West coast was all that is offered here in that regard, the beauty of it. The East coast is a great place to put up billboards. The landscape looks almost identical going south from D.C. all the way to Miami, except for the palm trees. North of the capitol it is identical, except for the occasional skyline to break up the industrial waste, at least as it is near the highway.


I was also going to post a picture of a crackhead with this post, thinking that it might be funny, like David Chapelle, but it wasn't. I mean, it really wasn't. The images are just too sad to laugh about.

Do a search, you'll see... not for crack, but for pictures of those who do.