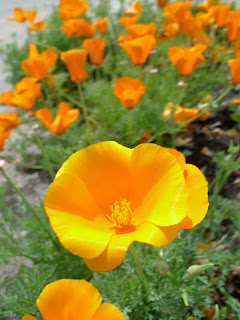 The Eschscholzia Californica have bloomed again.

Okay, sometimes I get a little too carried away with my atheism. I have listened to people spout nonsense about their religion all of my life, myself included, and sometimes I just lose my mind at it.

Then, something will happen and I am quieted, if not humbled:

Yesterday, after posting my screed, making up a few things freely as I went along, just as the writers of the old and new testaments must have been doing, I found myself browsing the internet. A friend had posted a picture of a young boy that I didn't recognize. It would have been his birthday, and she his mother. He passed away a few years ago. I wanted to write something, as many already had. But what can be said, really? What possible contribution can I make in the face of such a thing? It is impossible to imagine, and difficult to stop trying. It forces the mind into a place from which there is no escape, no resolution and no ready-made rationale to assuage the enormous feeling of it, the endless emptiness. There is only the painful mystery of death. It is unfathomable in the truest sense.

I thought of it all day yesterday, this morning when I awoke. I can not shake it.

I made the mistake of telling Rachel yesterday. Almost immediately came the tears, demanding that I stop, which I did. Later on in the day she would say something that I would think was about the boy, or his mother, and I would continue. She would correct me, Please, no, no... I wasn't talking about that.

Who could possibly deny Christianity for the mother of that boy, if she so chose? If that is how she opted to try and make some sense of it, to answer the mystery with a personal promise clutched from the cosmos with the premise of a loving god, and the defeat of death.

Not me, and I do not mean this in a condescending way, at all. I really mean it. I would argue against religion to most. Of what use is atheism there, of what harm Christianity?

I know what my atheist friends will say to me... If you can justify Christianity here then why not also in your own death. I can't answer that. I know that it makes no sense, but the argument feels suddenly foolish.

There is nothing to attach to it, nothing to justify. There is only nothing, and then more nothing; as far as the mind can stretch and the heart can reach, emptiness.

Nothing happens in a vacuum, but it also happens for all time.