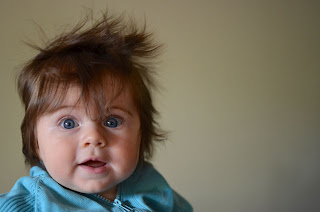 Everywhere I go people keep telling me how beautiful my daughter is.  I just smile and say, "Oh, isn't she?  It's her eyes, so blue."

Rachel wants to cut his hair but I am insisting that we do not.  I know that there will be no return from it.  From that moment on he will be a child and not an infant, on his way towards some other stage of development.  I do not care about the actual delineations between those two terms; it is how it will make me feel.  I love his hair exactly the way that it is.  I picture him with a little haircut and I cringe, though I know it will happen eventually.  It's not as if he currently has any job interviews to go on.  How could Rachel possibly take him to Christmas Mass looking like this?

A friend of mine's son had alopecia.  In solidarity my friend shaved his head so that his son would not alone feel the shame of hair loss.  His son barely noticed.  He continued on just being a happy little boy, almost entirely unaware that he had any reason to feel one way or another.  My friend, who works in investment banking in NYC -  you know, the bad guys - then carried on looking like a rather tall white supremacist for a few months.  I encouraged him to get a forehead tattoo but no luck there.  It didn't have to be overt, not all forehead tattoos demand such a thing.  It could be a benign message, or even an ambiguous one.  A swastika, or the word "hate", certainly conveys its intended message.  But he could go with something like "explode" or "live feed" or "commission."

He could also do the past tense "commissioned...", with the ellipsis.  That would still be threatening enough, though perhaps not so much to his work colleagues, more to the 99%ers.  His work colleagues would likely find a way of marginalizing him and his unexpected ambiguous forehead message.

Ok, I just got an email from my old Scottish anarchist buddy, telling me how happy he is that I've discovered Rosa Luxemburg.  Like me, he fails to understand how the masses are not enraged.  The only thing that many people are willing to become enraged about in America is the very idea that poor people have a say in the process.

One explanation is known as the Fox Effect.

That last link is a poorly written wiki-post but here is one that is more exhaustive and (should be) more enraging.  I have a friend that often cites Fox News reports as a counter to any claim by the left, particularly climate science and the meaning of The Constitution.  My friend was educated in the sciences and has read The Constitution, you see.  He wields these facts as an online scimitar in vague warning towards others that he is not to be trifled with.  He disagrees with the Supreme Court's decision on the ACA because he is an expert in liberty.  He professes to know the scientific method yet oddly ignores the last two steps when it comes to Fox's reporting: Test and Analysis.

I suppose it is convenient that his dogma is supported by Fox News and citing them freely as a reputable media outlet plays well into that.  I mean, why not?

It is maddening, but what can be done.  Perhaps a reminder of the scientific process will suffice.

That, and a simple forehead tattoo.... "confirmation bias"