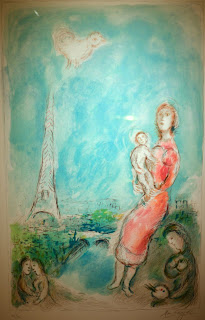 Leaving for LA this morning, might not be able to post for a few days.  Thought I'd leave you, for now, with this simple image, a Chagall.

Yesterday I went into SF to meet up with Selavy.  We drank too much, and of too many varied liquors.  I feel ill today.  Not exactly hungover but there is definitely a sense of lost vitality.  There will need to be a time of recovery.  Seven hours in the car to LA, if all goes well, should just about do it.  I hope.

We visited several galleries, Rayko, and then the MOMA.  A thing occurred to me while we walked through the permanent collection.  Modern art, that is art from the modern era, doesn't really do much for me any more.  After having lived in New York for more than a decade, seeing many modern masterpieces on a consistent basis, I am now much less interested in them than I once was.  Selavy pointed out that perhaps I have only become accustomed to their messages.

What I speak of is not a complete condition, and it is not that I do not hold much of it in high esteem, but only that I do not get as excited as I once did to consider it carefully, to see it up close.  We walked through the gallery of the permanent collection quickly, without much conversation, stopping here and there to note a familiar piece.

The trouble I have is that there is not much to replace it with.  I find much contemporary art interesting but not as a collective movement.  I have less consistent enthusiasm for most of it.  Post-modern art leaves me cold much of the time.  I find myself considering motives, strategies and techniques rather than themes.  Yes, of course, that is often its intention.  Boring.

It is time to search again, to look for new meaning, to find new themes, to become excited for a time at something new.


Speaking of (sort of): Selavy unsuccessfully tried to convert me to agnosticism yesterday, claiming that there is as much evidence for there being a god as there is for there not being a a god, none at all.  More precisely, he called it a "conscious ordering of the universe", not precisely "god".

But there being no evidence of there not being a thing does not function in the same way as there being no evidence that there is.  I don't claim to know with complete certainty that there definitely is no god, I only claim that those who claim there is have offered no substantiated evidence for their claim.  I choose not believe in a thing that gives no signs whatsoever of its existence.  My assertion that there is not currently a knowable god in the universe is based on that simple lack of evidence.  I'm happy to reconsider at any time.

Likewise, I don't claim that man knows all that there is to know.  But I can say that not knowing of a thing is not the same as claiming to know of a thing, with certainty, that can not be evidenced.  Faith is not a substance, it is a quality of the imagination.  That it can be generated and sustained does not prove the existence of the thing it imagines.  That would be like claiming that all fairy tales must have actually occurred because somebody thought of them.  How could thought be possible if it is not based in tangible reality?  That absurd claim answers itself, we do it all of the time.  But there are no flying spaghetti monsters, yet.

I'll happily convert to whatever worship system the "conscious ordering of the universe" requests of me.  I just need to see the request, preferably with some grated parmesan and a nice glass of chilled chianti.