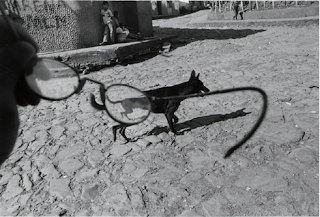 The crazed dreams continue, disturbing visions that the mind forms to wake me, to tell me to get out of bed, to piss.  My only fear being that one day I will learn to sleep through them, that they will exist unquestioned, under the surface like some dark wandering disease, as I dreamily piss the bed around me.

Last night's visions were so disturbing that I can not repeat them here.  Many of you might worry about me if I confessed to their formation.  The sequence ended in a crowded hospital waiting room.  There were many misshapen there, waiting, trembling with their maladies.  Their desperate eyes followed me.  I felt ill looking closely at their elongated dream afflictions.  Before I had time to run my sleeping mind pulled me up and away from them.  I limped off lazily to the bathroom, then back to bed.

Moving on.  Today is a big day, then tomorrow another, then the big days of the long weekend in LA begin.  It will be our first road trip with the boy.  Seven hours each way, if all goes as planned.  Two days in the sun.  LA frightens me the way that avian influenza frightens me,  that it will one day suddenly catch on and overtake the world.  There are areas of LA that I enjoy, though none so much that I would fight to see them saved from zombies.  I only vaguely wish them to be preserved in the impending apocalypse of the lifeless.  It does seem fitting that LA be destroyed in zombie doom.  LA requires a catastrophe commensurate with its leprous appeal.

No, I only kid.  LA is a great place to smoke speed, lots of strip-malls and parking lots to wander around in.  One needs wide open spaces when in that condition.

I am beginning to understand why men like to drink whiskey alone as they get older.  I will, hopefully, drink it more slowly when sitting alone than how I would when talking with others.  The effect of that particular alcohol is quite different when drank this way.  It carries a misty warmth that marks itself as opposed to what occurs when drank rapidly.

Never tilt your head back when drinking whiskey.  That is what I've learned, it is my wisdom.  You are gulping the stuff when you do.  Always tilt the glass towards your lips, keep your head as straight as a toltec mask, eyes locked on an imaginary horizon.  Let your head be a stone altar piece, anything less results in upsetting the whiskey yahweh.

When drinking it with others there is much more room for trouble.  It is trouble lubricant, made of kerosene, WD-40, and trace amounts of alcohol.  Because one urinates less when drinking whiskey it creates more time for mischief, danger.  That is why beer is somewhat self-regulating.  Having to go the the bathroom creates an opportunity to reset, to reconsider.  People talk to themselves when pissing, or to god, or to mommy's little dancing soldier.  It is helpful to use that time wisely.  Also, there are often mirrors in bathrooms, a conditional glimpsing of oneself can have an occasionally sobering effect.  If everybody made it a habit to always look at themselves in the mirror when drinking then some of the world's evils would be cured.  It would, of course, birth other dilemmas, but we could get around to those as needed.

I used to get handed little bags of cocaine after dinner in restaurants.  I would then wander off casually or hurriedly to the bathroom to snort some.  For a time I got in the habit of looking directly into my own eyes for 30 seconds before doing any of the coke.  If, after 10 seconds, I still wanted to do some then I would.  But not every time.  Sometimes I would walk back to the table, pass the bag back in the direction that it came, and nobody would ever notice.

Hard to believe, I know, but it is true.  It gives a different perspective on drugs, to watch others do them when you are not.  Much like alcohol it makes them less appealing.  To sit in a room full of people all jabbering away on cocaine, drinking to match their newly found intake levels, is a genuine eye opener.  You can watch a table, or room, full of friends reduce themselves to yammering demons, twitching with cravings that pass for desire.  Like the ones in my dream, only older, inflated with years, and twitching towards different things.

I shudder at how I must look running, when seen from a dream.