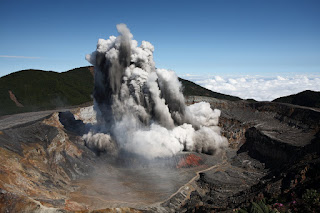 A 12 hour journey, through the hell that is Houston, but I finally made it to Costa Rica.  Much has changed here.  There are many more chain restaurants, American ones, everywhere.  The airport has continued its rebuilding but it is still far from complete.  Corruptions abound, everywhere you look.  It has been that way for about 10 years now, the airport - the corruption much longer, like most places.

It is the way of things, to be expected.

After arriving at the airport and collecting my record box, a thing that most dj's stopped traveling with many years ago, my friend Leo picked me up and we went to a sushi restaurant.  There we had several beers and cold sake.  We chatted with the owner of the club at which I will play on Saturday.  For some unknown reason, perhaps fatigue, I blabbered on and on about American politics.  America this and America that.    Perhaps I have finally become the thing that I always cautioned myself not to, an American apologist.  Perhaps I was only tired.

When I was checking in with the dj box, in San Francisco, the woman at the counter asked what it was that was in the box. I explained that they were vinyl records.  She was amazed, she claimed to have never seen such a thing.  I wanted to ask how long she had been working for the airline, to get an idea of whether or not she was a dipshit or if it was really true that djs long ago stopped carrying these hideously heavy travel cases and they are now an anomaly once again.  It checked in at just under 70 lbs.  I will be glad to be rid of it once and for all.  I only brought the records as a gift for my friends here, many old dance "classics' that I'm sure they will love.

After the sushi restaurant we went to the owner's beautiful house up on the hill, overlooking much of San Jose. We drank more beers and chatted further, with me still expounding on America's many global iniquities.  Idiot, I.  But the view from his house was wonderful.  At night when looking across at San Jose there is always a glimmering of distant lights.  I have never been sure if it is a result of the heat or if it is an issue of pollution or from some other cause that might be obvious but to which I have not given consideration.  But it is a familiar view and one that I have missed.  It is the same in many Central and South American cities.  It has been about 6 years since my last trip here, about 19 since my first.  It is nice to be back.  I'm not sure what time I finally went to bed, after many beers, but I awoke at 7am sharp, an almost unknown luxury at home with the boy awaking each day with, or before, the sun.  The extra hour really helps.

Today, hopefully, we will go to the volcano, Poas.  It is the volcano that would threaten much of San Jose were it ever to erupt violently again.  It sits not far from the edge of the city, overlooking it like an ancient Mayan god.  It is active and has erupted several times in the last 100 years though not with such force that it has caused great loss, but the threat is always there. The caldera contains one of the most acidic lakes in the world.

I have tried to attach an image but so far no luck.  I'm not sure what the trouble might be and I am still too tired to troubleshoot it.  We might have to live without an image today.  I believe that would be my first post ever without one, though I could still be under the effects of lingering sleep.  I should still be sleeping while I have the chance.  Something I will go lie back down and hope to achieve.  The open blue sky will eventually call me to action, to explore, but hopefully for now it will leave me alone with my dreams for another hour or more.