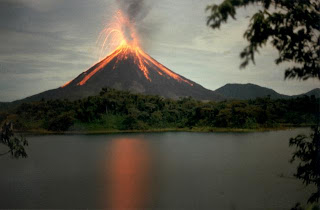 There was never any chance of me going to visit this volcano on this trip.  But I have been there a couple times before, once with lasting significance.  I will tell that story in a little bit.

I have visited and stayed with my friends here in Costa Rica, at their houses near one of their farms, for several years now - about a decade.  The entire complex is centered around the grandmother's house, the abuela, whom I had never met until today.  She must be approaching her 90's.  I was expecting her to speak Spanish, almost exclusively, and was surprised to hear her perfect English with a French accent.  She gave fascinating glimpses of her life; being born in Brooklyn, living in Washington D.C., growing up in Paris, being of French descent, and of her eventual move to Costa Rica.

She listened also at my stories of falling in love, getting married, having a child, as well as my family's regional and geographic history, etc.

She told stories of the past, her memories of the 1930's and forward.  She was bright-eyed and encouraging, and was as interested in hearing my tales as she was enthused in telling hers.  In short, I was charmed by her, immediately.  We will hopefully have time to talk more at dinner tonight.

I asked if I could take pictures of her courtyard.  There are clever little mural paintings on the yellow walls of the characters from "Alice's adventures in Wonderland" found there.  It is a special place for Rachel and I.  After breaking up with my previous girlfriend and suffering a rather painful series of realizations concerning that relationship I needed a long break in a beautiful place.  I extended my upcoming trip to Costa Rica.  Rachel and I had resumed the intimate communications that had been somewhat hobbled by the relationship just referenced.  Eventually I asked Rachel to come to Costa Rica with me.  She was living in LA at the time, and I in New York.  Though we had had an intermittent relationship previously in Manchester and NYC it was there in Costa Rica that we fell in love.  Or, I with her, I should say.  She states that her love for me had its precedents.

So, each of the individual memories of our time there have taken on special significance.  On that first trip together the grandmother was out of town and my friends assigned us that room to sleep in, as we were the guests and they wanted us to be as comfortable as possible.  The room was quite magical for us, enchanted even.  The courtyard that was off of the room, the light that made its way through the vines above, the yellow walls, the hammock, the paintings, the canopy, all of it.  It has become a part of the mythology of our love.

After a few days in San Jose we began the journey out to the beach, where our love took on its most increased physical manifestations.  In this way nature seems quite perfectly arranged.  We hardly left our room for days, and when we did so we both carried glowing but coy smiles.  I'm getting ahead of myself.  Before we got to the beach we broke the journey up into two different drives, spread across two days.  The night between we stopped at the Volcano Arenal.  It has famed mineral baths with recognizable restorative benefits, though I do not believe we made it in time to bathe in them.  We arrived in the dark, after many hours on the road.

It is an active volcano in the truest visual sense, one need only look at it to immediately know.  With its easily discernible volcanic shape from decades of lava strafing everything off of the mountainside and producing the nearly mythical volcanic cone: an opening at the top, often with telling steam floating up from it, and nothing but burned evidence down each steep side, ravines that tell of many previous molten flows.

Threatening in every way, fascinating without invitation.

We all met for dinner late that night at a restaurant that gave an impressive view of the volcano.  The power had gone off in the entire region so the only visible light was the candle light on each table, barely enough to eat with, mixed with the occasional red burst from the mountain.  In the near complete darkness we listened to the grumblings of the earth and felt the vibrations shaking the ground upon which we all sat.  Red lava dripped, poured, and shot out of the caldera at the top to everybody's excitement.  Occasionally there was a large burst of lava flying into the night sky, or alternately oozing down the side of the mountain, reminding us all of its pre-historic potential.

To say that it was romantic, fascinating and a touch frightening would each be understatements.  Of what use are those words when held up against such memories.  What we held instead were each other's hands under the table in the darkness, fumbling for the occasional blind kiss at the table, bumping into one another with intimate excitement.

After dinner we retired to our perfectly unlit room together where we continued our romantic discovering, the earth shaking and growling and forever spinning underneath us.