Just pray the evil away, folks. 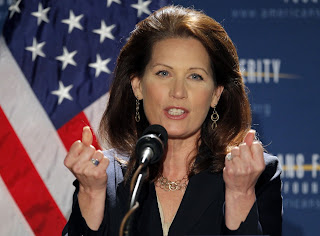 At first I ignored Michelle Bachmann's accusation that one of Hillary Clinton's longtime aides was a mole for the Muslim Brotherhood.  But then Newt Gingrich blundered in and defended Bachmann's wild claims, throwing his face weight around a bit.  Gingrich contends that the elites of western culture are not prepared to address the threats of radical Islam.  His apparent solution is to instead support a radically fundamentalist Christian whose answer to things seems to be making baseless allegations couched in the form of supposedly innocent questions concerning the nation's security.  Welcome home Mrs. McCarthy, you've found a hefty new host and partner in Newt Gingrich - no big or small surprise there.  This cretin will do or say anything to keep his jowls blubbering in the press.  It should shock nobody at all that he's peddling this sort of swill, trying to give it some traction, one more revenue stream for his security con-sultancy.  I'm surprised it's taken him as long as it has.  Well, to be fair, maybe it just took this long for the media to notice.  Who knows.

My god, do I wish he would have stayed in the race longer...  I was so hoping to hear some more about that new state on the moon.

As for Frau Bachmann... It seems as if she's taken a page right out of Palin's pop-up picture book of politics. Pure Us vs. Them:  If you're one of them, then you very well might already be a radical Islamic extremist without even knowing it yet.  They're so hell bent on America's destruction they'll let you eat pork, be gay, be married to a gay man, whatever.  These people will stop at nothing to infiltrate our country.  They will plant evil thoughts in your husband's mind to infiltrate your home life.  Only Christ's love can purify sin.  I should know, I've been on fire for Jesus my whole life...

It's all true, of course.  The evangelical eyes can always see it first.   When are people going to wake up and see this woman for the cheap hate-mongerer that she is.  I hope this latest slip ushers her out of public office forever.  Are people ever going to tire of this horrid nonsense being peddled off as patriotism?

Who ever knows...  What did Mencken say, Nobody ever went broke underestimating the taste of the American public.