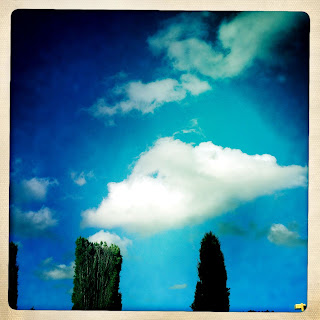 We failed.  My readership abandoned me at the critical hour.  I had even tried to help them cheat a little bit, posting a secondary link on the final hour, hoping to rake in the last few views.  We fell short by a small handful, less than 20 pageviews.  It was to be expected.  It was a weekend day.  I am listening to Radiohead's "Kid A" album now, in mourning.

But life moves on, so we must also.  There is always this month to consider, already off to this melancholy start.

No, I just kid.  None of it truly matters to me.  It is only something I notice because Google gives me a glimpse into those things.  It is satisfying knowing that what I write is being read, that is all.

Last night, before going off to bed late, it occurred to me that I don't even have the vaguest idea of what I'm doing in some regards.  Getting a job, being interviewed, etc.  I went into SF to meet with a job recruiter.  He went over some basic practices with me. One of those was to get the names of the people that I meet and send a follow-up email thanking them for their time, when appropriate to do so.  We practiced some interview techniques and he directed me as to how to answer certain questions, what to avoid, what to focus on.  After the meeting I was going to meet a friend in town for a beer but I decided instead to make my way home and beat the commuter traffic fleeing the city near 5pm.  I got home and thought some more about what he had said, practices to practice.  So, what was the thing that I forgot to do with him: send him a thank-you email.

Ooops.  I haven't heard from him since.  I'm even on LinkedIn now.  I had thought that the job offers would just come pouring in.  Maybe it was a mistake to use this site as a reference point for various other interests that I have.  Mentioning Traci Lords and Bath Salts in my subject heading could somehow work against me.  Who knew.... but I see that now.

It's too bad that there's not a job out there that involves me writing for this site every day.  That would be ideal.  I would go out and take pictures and have experiences, then come home and write about them.  Why isn't the world structured in such a way that I can do that?  Why readers, why?

Though, it remains possible that by doing so I would grow to resent having to write for the site every day, treating it like a job, hating my inner voice as an authoritarian manager of some sort, questioning my work ethic and on-site behavior.  Before long I would start to slack off, taking 20 minute breaks when I'm only allowed 15, making pointed jokes about any new policies I've put in place, clocking in late and calling out more often than the allotted amount, claiming to be sick when I was really only tired.  Hiding upstairs in the bedroom hoping my computer doesn't see me.

What this site needs is a human resources department - somebody I can talk to, without fear of losing my position, or worse.   A pin-up HR girl-next-door that I can confess my secret dirty deeds to.  That was one of the things that got me in trouble at my last job.  I suggested doing a company-wide calendar called, "The Kinky Girls of H.R."... Only my buddies thought it was funny, management however, did not.

No, that was only one of my project ideas that I refrained form converting into a formal proposition.  I confess everything to Rachel now, she's my unofficial HR manager.  She has a file on me that includes company secrets, strict policy and procedure stuff.  An ever-expanding file of would-be grievances, swelling at the seams, bursting with behavioral overflow.

Wait.  That can't be right.

Quitting work felt good but now there is a vaguely unsettled feeling of floating, drifting.  There is no clear end in sight, the mind begins to grow tentacles.  When I left the job it felt great.  It felt like I had cheated on everybody's taxes, like I was flying in a dream.