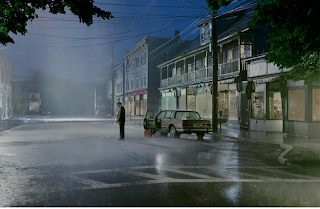 My life is terribly uneventful.  It is becoming problematic for me.  I can feel a restlessness growing; the desire to seek, to wander somewhere.  But there is the boy, the wife, the family.  There will be less and less wandering for me.  There will be planned trips mostly, if not only.  Nothing sudden will occur in my life any more, nothing sudden and good, that is.  There will always be the future unexpected news from a doctor.   The shock of test results that one day await many of us.  There is that, then the other, sudden kind also.

"I do not know which to prefer"... Grim thoughts on a Saturday morning.

Taking care of the boy all day is difficult, it can be.  It is far more difficult than I thought that it would be.  We had a bad day yesterday.  He wouldn't sleep and was unhappy with me most of the time.  Finally he fell asleep on the bed next to me after much playing and distraction. When Rachel came home I went downstairs and fell asleep myself for an hour and a half from the stress of the day alone.  It is exhausting.  There are some days when I would gladly go back to work at Apple, I tell myself.

I have been preparing for my dj'ing gig in Costa Rica.  I am very excited about it, almost scared.  That was sudden and unexpected and good, in a way.  I knew about it some time in advance.  But it was unexpected and good.  It has been a long time since I've traveled anywhere, a couple years.

The passport agency eventually did return my old passport.  It was mailed in a separate envelope a few days later, as some had said it would be.  I was relieved.  Now I won't have to write Rhys a journal in any leather bound notebook (comments section).  Aye, people... Save me, Sartre...

I must be bored.  I am picking pointless fights.  Ones in which there is no possible way of winning.  Is there ever?  No.  Though I don't suppose I am arguing to win.  I am only arguing to argue.  It must be a joy unto itself, otherwise what is the point?  Truly.

It is a grey day here.  Our friends have left for Wisconsin for nine or ten days.  We must watch over the garden while they are gone, harvesting the squash and beans and zucchini and lettuce.  We must pull the edible basil flowers from the plant to encourage continued growth.  I am learning more and more though not through study, but rather through observation and experience.  My observation, their experience.

I will, of course, snoop through their house while they are gone.  It is an obligation one has when given the keys to watch over somebody else's place.  I forget if it was Richard Ford or Raymond Carver that wrote about a man who becomes obsessed with "watching" a neighbor's house while they are gone.  I believe it was Carver.  But the story stuck with me, the awkward familiarity of an almost anonymous attachment.

Who knows, maybe I will move in for a week and pretend that my life is another's altogether.  I wonder if they will read my site while they are gone.

"What good are insights? They only make things worse." - Carver