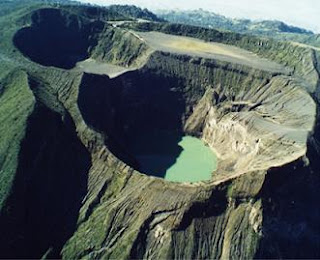 I was right.  I wake up hideously early compared to everybody else here, even though I went to sleep late (for me), sometime between 1 and 2 am.  I snapped to attention at 7 sharp.  Still, an extra hour or so more than I would get at home, but it would be nice to sleep as a normal person does.  I"m told they get about 8 hours a night, when averaged together.

We did not go to the volcano yesterday.  There was cloud cover most of the day.  Had we gone we would have gone to Irazu, which is closer, though Poas is bigger I believe, and more dangerous.  They are both still active and have lakes currently occupying their caldera.  Several years ago they had to evacuate an area because the volcano Arenal had become active shortly after I visisted.  The same thing happened in Guatemala.  I read about it in the news after returning home, thinking the coincidences odd.  I assumed that the gods were catching up with me, moving from volcano to volcano in their tectonic search.  Their anger at my disbelief waiting to be released upon innocent villages.

So, instead of visiting the volcano we went to buy coffee for me to bring home.  The corner store would not do, we went to the source, out to the fields and hills where the coffee is grown.  It was a four hour drive each way, through city and jungle and across rivers and even a dam.  The bridges were all constructed by the British in the 1920's when Costa Rica epitomized what was then known as a banana republic.  Many of them were single lane suspension bridges traversing river valleys that ignited the imagination with disastrous possibilities.  If you met an oncoming car you would wait for them to cross, giving the mind time to do what it does, envision your death and the automobile free-fall that shortly precedes it.  The cables seemed to be made of strands of rusted licorice.  It was quite a drive.

I have yet to try the coffee.  I guess I will break open the bags when I get home and seem cool to Rachel and her mother for having brought home such an exotic treat.  That, and the pound of cocaine that I'll have swallowed in individually wrapped condoms.  I'm hoping that I enjoy their evacuation more than I did the ingestion, etc.

The same is true today as it was yesterday, no pictures to upload.  Maybe I'll insert some when I get home to augment my posts.  I'm certain that it has to do with writing and editing above the html level.  I'm using the easier graphical editor.  So be it.  I am in no mood to wrestle with a computer in paradise, especially if the outcome is for me to lose.   I've been warned to try and remain calm, that overexcitement can lead to overexcitement.

Who knows, perhaps today we will go visit the volcano, if the weather holds.  Last night there were heavy tropical showers through much of the night.  My friend and I returned late from having gone into the city center, the rains were both terrific and soft, quietly coming down in vast cloudfuls in the dark.  The sound of it put me right to sleep.  There is no saying what it was that woke me up, perhaps an angry volcano god grumbling at the hint of my return.  Or, the sun breaking in through the blinds, reminding me of my days remaining.  Or, only that my troll gene has finally been released.  I must now go return to my people who inhabit the mineral pools and caves under the volcano, losing all interest in humans and human affairs.

I will know when I look in the mirror, my eyes will have turned to anthracite, and I to metamorphic stone.