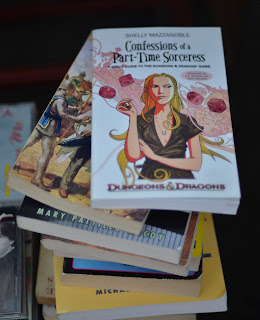 I don't know what has changed, but something has.  I tried to log in to this site today and it wouldn't let me. Then it gave me a warning about not having cookies enabled, which I did.  So I went into the preferences pane and enabled "Always accept cookies" rather than "Accept cookies only from sites I visit" and voilà....  But that can't be right.  I have had a lifelong policy of always accepting cookies. But we live in unhinged and menacing times.

Charlie Sheen is the only person who seems to have it all figured out.

Google wants me to accept all cookies just to use my own site...  Strange.  Well, they must know what they're doing.  Their track record has been nearly flawless when it comes to matters of privacy. So, why should I worry.  I have other things to worry about, like the "Confessions of a Part-Time Sorceress"... I really should have bought the book. Since taking the picture above I've been curious what Dungeons & Dragons fans would be reading about, especially in that regard. I wonder what a few lucky polyhedral rolls of the dice will get her to admit to....  Truth spells, power pacts, princess-warrior panties, secret succubi, who knows...

Does the world change for the worse, or for the better?  I don't know.  I suppose most people have an endearment towards their own youth, those times, their coming of age.  I remember I used to ride my bike to The Interstate Mall on 436 with my brother. There was a record store there that sold ecstasy and there was a gaming store there in the mall also, with metal figures of dragons and sorcerers, elaborate chess boards.  I gravitated towards the record store.  Don't believe what anybody tells you, ecstasy was $40 each before it was legal.  I always hear about it being $5 in 1984.  Bullshit.  Well, maybe in other places, but in Orlando, at that record store, it was expensive. I wasn't about to spend $40 of my hard-earned lawn-mowing money on a little white pill.  That all changed, of course.

One of my deepest regrets is selling off my record collection when I was younger.  I thought that I would replace all of them with cd's.  I didn't.  My brother and I both bartered away most of our collections for a small fraction of what we had paid for them.  I believe my brother might have sold his entire collection in one go, at a record store near the Jai-Alai, across the street from Club Juana.  The name of the store escapes me now. All of the artwork, the liner notes, the tactile sense of holding the records, of sitting on the floor and reading the lyrics while listening to the albums.  All gone.  Well, sort of.  A few years later I started re-buying records, but ones of a different nature.  House music... house music, house music.  I suppose when it really comes down to it I don't care much about having Jethro Tull albums any more.

I think it's funny that the sorceress above is only "part-time"....  One must wonder what Dairy Queen she works at when she's not casting spells over pubescent fat kids dreaming of Princess Leia and Boba Fett with the Solo, Han.  I bet she makes an absolutely enchanting banana fudge sundae, a bewitching root-beer blizzard, and a charmed chicken strip basket....

Confessions of a Drive-Thru Demon...

(Disclaimer: I made the mistake of reading selavy before sitting down to write today, so C. Sheen's exploits were freshly imprinted in my mind.  I wish Charlie would name one of his children Afro. Nothing would make me happier: A. Sheen)