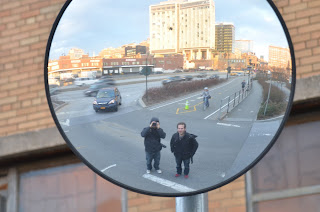 I went on a photo-expedition yesterday, to the west side of the island.  Nothing much came from it but I did develop an idea for a short video project.  I will have to check into New York law and see what the requirements of shooting video in the city are.  My friend said that as long as I'm not using a tripod then it's permissible.  Once I verify then I will proceed from there.  The project will work better once it warms up a little bit, I think. So I still have some time. 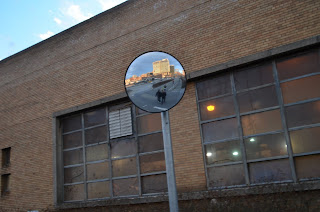 The Hotel seen in the background of the mirror is the one that is famous in NYC for having people appear naked in the windows.  Exhibitionism is the term for it.  We saw no nudity yesterday but it is very easy to understand how the fascination developed, the situation virtually begs for it. The Hotel was constructed straddling the High Line on the west side where public nudity is perhaps more popular, encouraged by the tourists, and conceivably conducted by them as well.
Interestingly, the name of the hotel is The Standard.  Here we were looking up the hotel's skirt.  All pretty standard stuff, really. 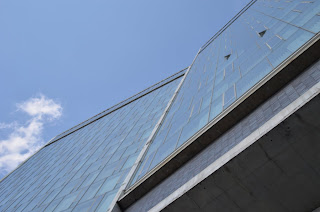 These were just silly pictures in a fun-house mirror.  I spoke with a friend about getting a lensbaby lens.  We decided that we would split the cost of the lens and share it, as neither of us really needs it in a full-time way.  I suppose I should check with him and see which one he wants to get.  He had one before and it got stolen.  I hear story after story about stolen camera gear in New York.  I know that the phenomenon is not exclusive to this city, but it strikes fear into the heart of the marginally impoverished nonetheless.
The picture below reflects my fear of theft as I am keeping the camera in the most direct possible line of sight imaginable, for the purpose of insurance policy and procedure. 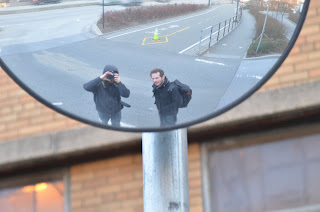