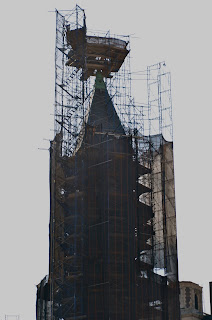 Memory is working on me lately, rebuilding.  It keeps coming back to renovate, to restore.  I never know when to trust it, or when to demolish.  Memory has too often been my favorite liar.

The rickety scaffolding never seems to be enough. It somehow becomes part of the structure, absurd without it, impossible. The job is never complete.


I have a recurring dream in which I am back in college. I suddenly realize that there is a very difficult class, usually math or chemistry, that I haven't been going to in weeks, maybe months, even when I'm naked.  I am afraid to ask the teacher to drop me from the class, to withdraw. The deadline has passed.  There is no way to catch up, the books have not been opened in months. There is no way out.  I awake in tired terror.  Some mornings I am in a panic of sleepy shame.  Dazed by my self.

I never learned enough, never studied as much as I could have.  Most things came to me far too easily, so I did them with only half-hearted effort, showing most how much better I could do than most, but without really trying.  But it was not "most" that I wanted to impress.  I wanted to impress the other ones, but I never truly tried. I was afraid of trying, of competing. I was afraid of not being the best, ever.  So, I lounged in snobbish ease. I took comfort in being accepted by those whose acceptance I hardly sought.  I used approval as a drug, eschewing it from the outside, demanding it from those within.

At least in this I wasn't alone, ever.


I still operate under this principle, and far too often. I barely try, but do better than the average, sometimes with amazing ease, sometimes with abysmal failure. But my average is more easily attained than those around me.  I'm an annoying reminder that I'll probably never have to try as hard as others.  So, I'm not usually detested by those who try harder than me, and only occasionally a threat to those actually performing better.

How did I fuck up that math class even in my sleep?
Or was it chemistry?


A friend who has devoted his life to making and performing music once asked me why I didn't try harder.  I told him that I wasn't sure, but that maybe I wanted to get the most out of it for the least effort put in. Some would say I achieved grandly in that regard.

He always seemed at ease, and hardly ever trying. But he told me once that he has tried very hard, and worked very hard.  I was shocked and somehow disappointed.

I had wanted to believe that all of life could be one big easily received perpetual gift.  There for the taking, the asking.

Free was the word I always dreamt of:  Free....

The scaffolding needed to prop it up.

The scaffolds from which it hangs, along with ease.