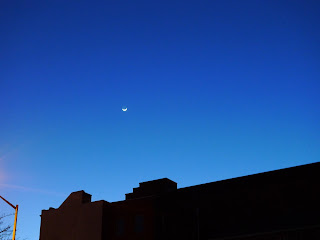 I was walking the dog yesterday as the sun was going down and I quickly snapped the picture above.  People tell me all the time that it is great to take pictures at sunset and sunrise, but I don't listen.  I don't know what's wrong with me.  It's as if through my entire life I've taken in information, repeated it, but rarely benefitted from it. I seem like a sensible guy, reasonable and partially knowing.  But at my core I'm an ignorant hillbilly that just keeps trying, sometimes getting lucky.

To wit, I took the dog up on the roof with me to get the picture below, shortly after our walk.  I brought a tripod and tried to capture the moon before it went below the false horizon of buildings, but I was too slow and inexperienced.  The dog was in complete cautious wonder at this strange place that exists above our cave.  He is conditioned to think that down the stairs is the only way out of the building, but then this...  He stayed close to me as I was trying to shoot, though I walked him around a bit to put him at ease. He seemed deeply unsettled by this new land, which might as well have been the surface of the moon.  I told him that it was. I showed him the 'pee of tranquility', where we landed in '69.

I used to go up there and sit in a chair in the summertime to try and get some sun.

Tar Beach, I called it. The place smells like urine now, but it used to be nice.


My friend at cafeselavy sent me this link earlier today.  It has depressed me because it made me realize that I'm not taking the pictures that I really want to take.  I am taking pictures that require no courage.  I have not learned how to ask people if I can take their picture, or do not have the nerve to just take the pictures and act as if it what I am supposed to be doing. The pictures in that link make me feel stupid, lazy and craven.  But they inspire me also, there is that.  My consolation for feeling cowardly, artistic inspiration.  Jesus that sounds pathetic.  I take it all back.  I am brave to have even looked at those pictures, you are the cowards for reading my inner ramblings.  What a bunch of creeps my readers can be.

Ok perverts, if you look carefully you can see somebody furiously typing out the manuscript to their first screenplay in the windows below.... have a quick peek...  It is a story about the government fabricating our moon landings, as told through the eyes of a dog. 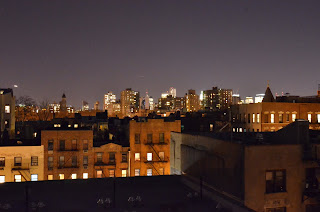