"I will write peace on your wings and you will fly..." 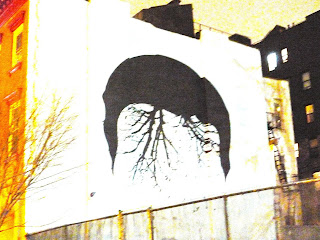 I awoke slowly to rain, the soft sounds of it coaxing me out of sleep and into a hushed grey day.  I slept much longer than I would normally be allowed to.  Not all things are bad with the wife being gone.  She wakes up about 6 hours each day before I might, if I were allowed to.  A woman getting ready for work in the morning always involves a hairdryer, a device designed to alert everything of its intentions for miles and miles.  I must admit that her hair looks nicer when it is over than before she started.  But at what cost, oh gentle universe, at what cost?

I stayed in bed after I awoke and read my friend's post. He disagrees with Ann Coulter about the various health benefits of radiation.  He was once my science teacher many years ago so I lean towards his telling of the story.  I wonder if Ann Coulter has read much about Marie Curie.  We are to assume that Miss Coulter is an ignorant monster, a shrewish harpy, which is a partial definition and explanation. But I've read her website and I must admit that some of it is funny. Though I prefer my propaganda coming mainly from the left. And she is of the other sort, to be resisted, not to be laughed at, but to be demonized.  But I suppose the right also needs their version of the jester, their media catnip.

It is all too much to think of first thing in the morning: radiation.  Let me get out of bed and feed the dog, then you can blast me with ionizing radiation all day long. Though at least wait until I'm at work to do so, where I might not notice as much.

I put an extra sugar in my coffee and tried to forget all that I knew of radiation and Japan.  It was easy to forget what little I knew of the harmful effects of radiation. Japan is much more difficult.  As I try to forget, more and more memories come back. I saw a wedding in Ueno Park, I think.  It was one of the most delicate things I had ever seen a human do, just walking forward with her bridesmaids.  She was dressed in the most beautiful way, with makeup and hair and outfit just floating along slowly, as if from a dream, where it now remains in my memories.  Moving straight ahead into her future life. Truly, it was beautiful. All of them dressed as if from a different world, assisting the bride, holding the garments afloat and walking along as a single unit.  It was alluring and exotic and graceful and fine.


I am going back to bed.  It is wet and cold and Monday, and the broken world is on radioactive fire, or at war.


I leave you with a few miniature figurines. 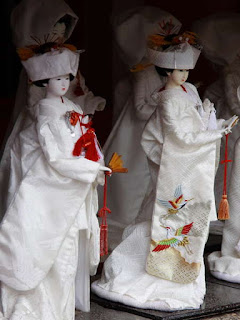