(Trey Speegle, Benrimon Contemporary)
I can't sleep. The canine started barking at some thing perceived in the hallway and that was the end of it. The end of the night.  I tried to go back to sleep but without much sincerity or success.  I will wait until Rachel has left for work and will try again, but that will be in 5 hours.  Being a light sleeper seems to have mostly disadvantages.  I fail to recognize any advantages to it in this brave modern age.  My wife wants to have a baby soon, and she sleeps in a near catatonic state. So I know how things will go.  She denies this, and probably will continue to deny it.  But I know.

I am bored and dulled by trying to go back to sleep.  My body is fatigued and not quite recovered from whatever sickness I've had.  I had thought that it was something that I ate but now people are telling me everywhere I go that there is a stomach virus going around.  I was its next victim, apparently.  People tell me to go to the doctor and get something to help resist it, but going to the doctor almost seems worse than enduring it. The doctor and dentist have not been much fun for me recently.  My dentist uses scare tactics on me.  I caught him doing it the last time and I cornered him with some questions, he will be fired soon. I suppose it could be easier to just stop going, or challenge him to a game of Monopoly, but what's the fun of just not going any more? I will call him and tell him that he can't scare me into dental hygiene any longer.

That doesn't make any sense. Maybe it's easier to keep the dentist and avoid the doctor. That seems more reasonable, and I... a reasonable man.

I wish there was a single beer here. It helps me go to sleep sometimes.  But there is none and it is too cold to try to go out and get one.  So I suffer on, nearly silent.


Recently I re-watched the film "Vertigo."  It is among my favorite films, and most likely the one I would name as my favorite, if asked. It is powerful and mystifying in continually unexpected ways. Even after seeing it several times it still maintains an odd effect, suggestive and counter-instructive.  The idea of obsessions, contrary urges, and forced shifts in identity, and how "love" plays a part in those things.  The dual nature of us all, the pleasure one extracts from what is frightening, and the strangeness of recognition. It is a fear of heights and a fear of falling all at once. The desire to jump exciting the mind, drawing it near the edge; the erotic fixation of abandon.  It is a film about the roles we accept and the effect those roles have on us.

The film seems to barely say or do anything.  There is a sequence of events but they don't make sense in the traditional narrative sense, not on the first viewing anyway. The events seem to follow an impulse that is vague, even doubtful at first, but the tension builds and builds. There is a climax and a resolution at the end, though even that seems inessential to something larger that is happening.  As if the ending of the film, and what it suggests, is incidental to inducing this feeling of spinning, falling forward into something unseen, the spiraling blind vortex of the dark heart.

There is an ambiguity to it as it develops.  I am never sure how to feel, but the feeling begins.  The options we are given at the close seem to be either moral or emotional, yet neither of those somehow seem right, neither of them stop the film from turning. The viewer is left with the same sinking sense of descent that the film suggests to avoid, and that it itself has perhaps transcended.

With no way to stop it, no way to yield, and no way out but down... 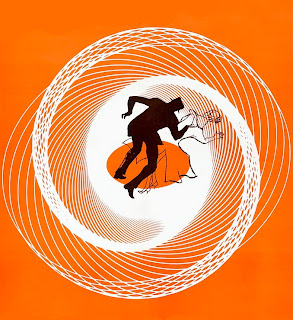