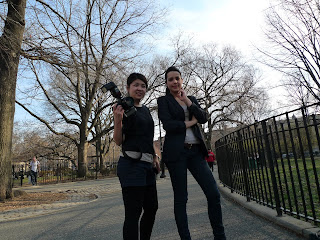 Here is the result of my first experiment at asking strangers if I could take their picture.  I assumed it would be less difficult asking a model and a photographer.  It is easy to see what the photographer thought of the angle I was shooting at, the model had less apprehension, naturally.  This was taken with my little digital camera. It is unchallenging to detect the barrel distortion that the camera is famous for.

The wife comes home tonight.  The apartment is in a fever of expectant preparation. I have had friends invite me over for dinner recently, as if I'm incapable of feeding myself without her here.  As if.... But I've eaten quite well these last few days.... Though none of it was in fact prepared by me.  The puppy is not the same without her though.  I can detect his concern at her absence.  I have forgotten to feed him for days on end.  I thought his behavior had become quite strange, and disconnected.

No, that never happened.  He has eaten as well as me, proportionately.


There are no adequate words to describe my desire to never work another day again as long as I live.  I have recently tried to transmit subtle indications of this and it has not settled very well into the employment paradigm.  No, again I kid.  But I have been giving thought to the disparity between what I have the desire to do and what I have an aptitude for.  I am variously employed for the proficiency I have towards a certain set of tasks.  I wonder how it is that some people seem to easily make the transition from that sort of situation to one which they daily enjoy, and are rewarded for.  It is beginning to occupy my mind more and more.  Certainly there exists an occupation out there for which I am meant, and one that is meant for me. One that will bring me satisfaction.  Pursuit is both elemental and missing in this fantasy consideration, though.

A friend once told me that the three requirements of a job in which he could be happy were:
- Autonomy
- Complexity
- Relationship between effort and reward

That seems sensible.  I have simplified what he said somewhat but I can understand how each of those contributes to a sense of satisfaction.

Working is somewhat new for me.  I begun it in earnest about 4 years ago.  It has become the structure that defines my life and gives order to my daily sense and use of time.  I greatly preferred it the other way however.  Leisure time and resources in New York are far more desirable, though less easy to sustain.  I was never very good at that either.  My life was either feast or famine.  Now it is neither feast nor famine, though the middle ground where I seem to have averaged-out and balanced those extremes seems far closer to the famine side than feast.


I just finished reading Frederic Bastiat's "The Law." It's an interesting essay on the purpose of the law (to protect the individual from plunder), and how tax laws and legislation have perverted the intention of that protection and become the very agents of legal plunder.  If a person's paycheck is seen as their property, the same as if it were land, and we begin to consider how much of it is taken away from us through various taxation laws, and how the resources of that property are distributed in ways that do not actually serve to protect us from plunder by others, then the government itself becomes the thing that we need protection from most.

This is a terrible reduction of the ideas proposed in his essay of 1850.  But the assertion that stuck with me most is that as a social-liberal I have been indoctrinated to believe that the government has a responsibility to help those who are not able, for whatever reasons, to help themselves and provide themselves with basic services, especially if they have been denied them or subjugated by that same government.  I had always thought that welfare programs really represent a small portion of what accounts for the overall federal budget.  But seen through the eyes of The Constitution this is all plainly wrong.  It is enforced philanthropy as managed by a federal government that is stealing off of the top as well as poorly managing the entire philanthropic affair only to accumulate more central power.  That is just a small part of where it all goes wrong.  When one considers the aid and incentive given to big business, paid for by tax dollars, in direct harm of the individuals of that society, then it amounts to collusion and racketeering on an enormously grand scale, especially when one considers the use of the military in international warfare and how that is paid for by the individuals that it is ostensibly there to protect.

It goes on and on, but sometimes it is refreshing to take a step back and look at the intention of the foundations of democracy, and then a clear look at the results.  It has been deeply disturbing, as ideologies are easily cherished, and shedding some of them off makes me sound alarmingly like the enemy.....

I will try to write more about this and clarify some of Bastiat's ideas better than I have done here.  But it is really staggering to get a clear glimpse back into the original intentions of democracy and how those ideals have been perverted past all recognition in our current economic and political state.


Who knows, perhaps the wife will come home and I will forget all about it.  I will go to work and watch large portions of my paycheck go to pay for programs that actually prevent me from buying a house.  We've got several wars going on that need to be paid for. Who would even think of owning a home in a time like this......  Muammar Gaddafi is preventing us from even buying a tent of our own...