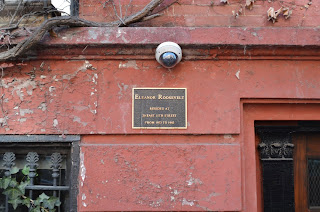 The security camera was perhaps installed to protect the plaque.

I've seen this plaque before but never paid much attention to it.  Yesterday as I was walking around the "villages", both East and Greenwich, I noticed the dates on the plaque and it occurred to me that those dates coincided almost entirely with E. Roosevelt being the first lady of the nation, when she would have resided elsewhere, presumably.  Strange, I thought.   I wish that I had taken a better establishing shot of this apartment building.  It is overgrown with vines, in need of a paint job, and high on the list of places to go to buy cocaine when the guy has turned of his phone.

I sat with a friend yesterday and we discussed drug use, mine.  He has been a confidant for several years and for some reason I get confessional with him after a beer or two.  Each relationship has its variety of functions and for whatever reason ours functions in that way, at times.

After many years I finally discovered why I should not do cocaine, beyond the obvious health considerations. It is because I do cocaine as if it were crack.  A normal cocaine user, of which I am at all times surrounded, can moderate their intake of cocaine so that it augments their intake of other intoxicants.  I am not of this sort.  I do cocaine as if there is a moment of epiphany awaiting me, as my heart surges upwards into rhythms unknown.  Others are able to ingest cocaine as if it were something barely made of drugs, mere children's aspirin, made for ease of use, for the relief of imaginary pain. They squirrel away little bags of it all over their person and are capable of stretching out the experience for hours, even days, on end.  I treat it as if it were the DMT experience and should be done to the full, as if some psychotropic enlightenment awaited me just on the far side of those fueled intake obsessions.

The approach itself is wildly unattainable. I know this.

Often I will hear my friends confuse the shrewdness of drug use with actual cunning, or wit. Unable to un-blur distinctions in that glowing frenetic state, unwilling to engage in any meaningful way, they suspend one set of faculties for the acceleration of others.

I can hardly tell what is being abbreviated and what is being stressed, but that is because in that advancing state I can hardly even see sentence fragments through to completion, much less sentences. Sustained dialogue is universally impossible with cocaine users, instead there exists only unique successions of rapidly repeating monologues, interspersed with interruptions, independent of grace, resistant to diversion.

I should make note here of the important detail that I really don't do any drugs on a regular basis any more.  This conversation was mostly reflection, etc.


Wait... I was talking about Eleanor Roosevelt, wasn't I?  I know very little of her life.  She is often accused of being a lesbian, though I'm unsure of the validity of the claim.  She was not a very attractive woman, as my senses report. She was strong and represented a new type of woman during a time that perhaps the country desperately needed such. She symbolized some changes towards the Democrat agenda that were resisted by the other side, and whose accomplishments are scoffed at by many die-hard GOP'ers now.

That's all I know, and little of that qualifies as actual knowledge.

I have been having some political squabbling with an old friend of mine, mostly surrounding partisan differences.  He seems to embrace the Republican myth and today I became an avowed anarchist, so there is tension bubbling on the haunted shores of facebook.... Tonight I awoke troubled to the memory of the last post I had made, in response to his. I responded again to him, then couldn't sleep, put on a shirt, poured myself a beer, wrote this post.


But now the beer is a fading memory and the bed songs me gently onwards.  The persuasion of sleep suspended in front of me, like the memory of pain under the effects of morphine....